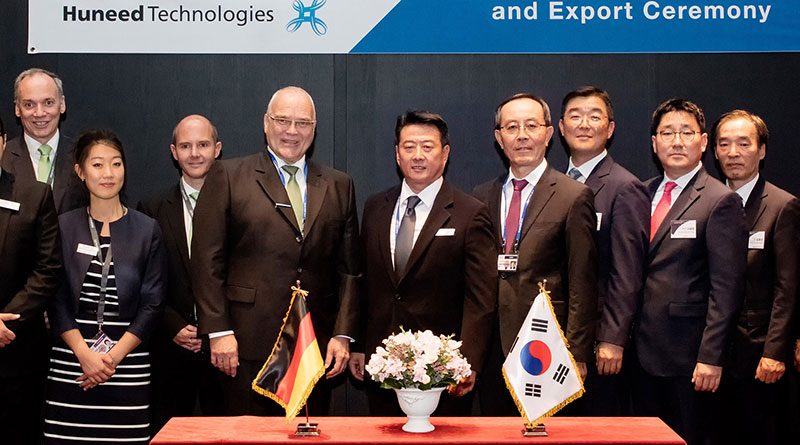 HENSOLDT, the leading independent sensor house, has entered into a close cooperation with Korean defence group Huneed Technologies Co. Ltd. thereby strengthening its existing ties to the Korean defence industry. Both companies have signed a cooperation agreement which is concentrating on the area of localisation of Identification-Friend-or-Foe (IFF) Mode-5 equipment for now.

“We are committed to bring the latest-technology capabilities in IFF into the upcoming IFF performance improvement programme of the South Korean armed forces which will improve the distinction between friendly and hostile forces and thus help to avoid friendly fire”, CEO HENSOLDT, Thomas Müller said. “I am proud that our companies have already succeeded in the localisation of the first IFF transponder according to the needs of the Korean armed forces.”


HENSOLDT and Huneed have recently finalised the localisation of the IFF transponder LTR 400, i.e. Huneed has proven the capability to manufacture the transponders, which are adapted to the specific requirements of the South Korean Armed Forces, and takes charge of the integration. The Korean Armed Forces performance improvement programme aims at the upgrade of the IFF equipment of thousands of Korean aircraft, ships and air defence systems from the existing Mode-4 to the new Mode-5 standard. The upgrade is under way in all US and NATO allied nations until mid-2020. After this date, joint missions, e.g. together with US armed forces, are possible only for units with Mode-5-capable equipment.

IFF systems allow ships and aircraft to be identified precisely by automatically sending interrogation signals, which are answered by so-called transponders on board friendly units. Field commanders are thus able to quickly distinguish friendly from hostile forces. Unlike Mode 4 used hitherto, the future Mode 5 standard employs state-of-the-art encryption techniques to avoid hostile manipulation of the signal.