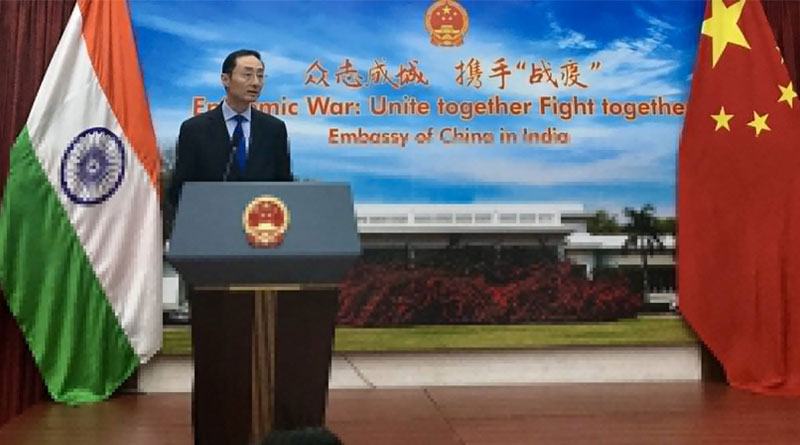 Stressing upon the trade volume between India and China, which stands at over USD90 billion, Chinese Ambassador to India Sun Weidong on the assistance rendered by New Delhi to coronavirus-hit Wuhan on 18 February said that helping China is actually “helping yourself” stating that the dragon state’s early victory over the epidemic will be beneficial to the development of both the countries as well as the global economy.

“Currently China and India enjoy close cooperation in various areas. More than one million people travel between the two countries every year and the bilateral trade volume is over USD90 billion. In addition, China is now in the significant position in the global supply chain. Therefore, China’s early victory over the epidemic will be beneficial to the development of both China and India as well as the global economy. It will help bilateral economic and trade cooperation get back on track. In this context, helping China is actually helping yourself,” Sun said while addressing media in the national capital.

The Chinese ambassador also pitched for bolstering cooperation with India in improving public health security which is a common goal for both the countries.

“China and India are the only two major developing countries in the world. As ancient civilizations, both countries have wisdom to offer inspiration to address challenges facing the world today. Improving public health security is our common goal. We can strengthen cooperation and exchanges of experience in this regard,” he added.

India and China have been keeping close communication on the COVID-19 outbreak. Prime Minister Narendra Modi had sent a letter of condolence to Chinese President Xi Jinping, “expressing his recognition of the tremendous effort made by the Chinese government to deal with the outbreak.” India has assured readiness to stand by China and provide the necessary assistance.


India on 20 February 2020 will send its C-17 Globemaster military transport aircraft to Wuhan to evacuate more Indians. The largest military aircraft in the Indian Air Force’s inventory will be the third flight to virus-hit Wuhan.  Earlier in the month, Air India flew two emergency flights to the Chinese city to rescue Indians.

Narrating a short story on how an Indian boy selling masala chai on the street hugged a Chinese national in India to show support, the Chinese envoy used the occasion to express how deeply touched he is by the “kindness of Indian friends at this difficult moment and that he can feel the sincere friendship between the two peoples.” “All these remind me of the time when Dr. Kotnis rescued the wounded and saved many lives and made great contributions to the Chinese people’s liberation cause,” he said. Dwarkanath Shantaram Kotnis, also known by his Chinese name Ke Dihua, was one of the five Indian physicians dispatched to China to provide medical assistance during the Second Sino-Japanese War in 1938.

While Sun admitted that the epidemic has brought certain impact on some industries such as transportation, tourism among others, he was optimistic that China will succeed in meeting this year’s target for economic and social development. He even said that it is easier to shake a mountain than China.

“The epidemic has brought certain impact on some industries such as transportation, tourism and caterings as well as small and medium-sized enterprises. In the short term, the downward pressure on China’s economy will increase, but the impact is local, temporary and limited. China is a major country with strong resilience, great potential and ample room for maneuver. We will stick to meeting this year’s targets for economic and social development,” Sun maintained, adding that the outbreak of epidemic will not change the sound fundamentals of China’s economy.

Despite the Chinese sanguine optimism in order to allay fears, one cannot overlook the negative impact it has had beyond the realms and boundaries. It is not a mere public health concern. The global automotive industry in particular has been hit hard by the virus as they are running out of the parts. The world’s biggest phone show Mobile World Congress (MWC), scheduled to take place in Barcelona between February 24th and the 27th this year has been called off due to coronavirus concerns. It is an annual trade show organised by GSMA, dedicated primarily to the mobile communications industry. It has been cancelled for the first time in its 30-year history. The Chinese firm Huawei, smartphone and 5G component maker was supposed to be one of the event’s biggest exhibitors.

Many countries have already started to feel the heat generated by the economic fallout erupted as a direct result of COVID-19. Per reports Japan is already facing a recession as the virus has led to the disruption of regional supply chains and exports. South Korea’s president Moon Jae-in has called out to take all “possible measures we can think of” to support the country’s economy. On February 19, South Korea has reported 20 new confirmed novel coronavirus cases raising the numbers to 51 from 31.

It is safe to conclude that the growth in the novel coronavirus epidemic is a direct threat to the global as well as regional economy. Over 70,500 people have been infected in China and 2,244 have died so far as far as on the record data is concerned.

On an unrelated note, when the US President Donald Trump who is scheduled to visit India on February 24 was asked if he is still satisfied with how his Chinese counterpart Xi is handling the coronavirus, he in Washington said to reporters, “I think President Xi is working very hard.  As you know, I spoke with him recently.  He is working really hard.  It is a tough problem.  I think he is going to do — look, I have seen them build hospitals in a short period of time.  I really believe he wants to get that done, and he wants to get it done fast.  Yes, I think he’s doing it very professionally.”