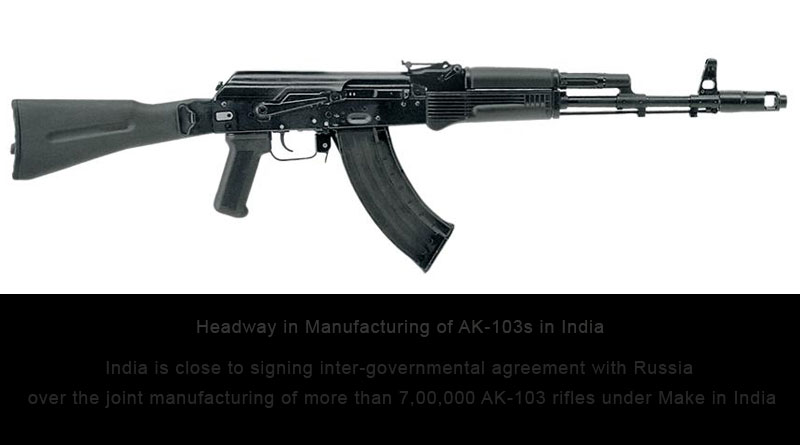 India is close to signing inter-governmental agreement with Russia over the joint manufacturing of more than 7,00,000 AK-103 rifles under Make in India

Days after signing the deal for procurement of 72,400 assault rifles for the Indian Army’s infantry units from the US-based Sig Sauer, there is a major headway for an India-Russia JV to manufacture more than 700,000 AK-103/203 assault rifles at Kalashnikov-OFB facility in Korwa, UP. According to sources, the inter-governmental agreement will be signed soon between the two countries.

The deal for the AK-103s is an inter-governmental agreement (IGA) for a 49.5 to 50.5 joint venture (JV) between JSC Kalashnikov and the state-owned OFB. Under the terms of the JV, both partnering manufacturers will raise a new facility in India to manufacture the AK-103s to replace the Indian Army’s INSAS and AK-47 rifles. The IGA underlines both joint production and joint development of AK-103 rifles.


Within the joint development, India will obtain all the intellectual property rights for jointly designed and developed product. The AK103 is the latest iteration of the Kalashnikov series of assault rifles, an upgrade of the popular AK47 and AKM rifles from Russia.

The decision to go ahead with the AK-103s to be made-in-India came in the wake of DRDO’s 2017 proposal to the Indian Army to replace the present INSAS and AK-47s with their own Excalibur rifle which was ultimately rejected due to several problems with the multi-calibre platform.

The Indian government is looking to achieve 100 per cent indigenisation for the AK-103s. The AK-103 could fill the second type of requirement given that the platform is extremely effective and battle-proven. Since the INSAS rifles are not only outdated but also prone to a plethora of major functional issues like jamming, this procurement would be a big boost to the army’s rifle inventory.