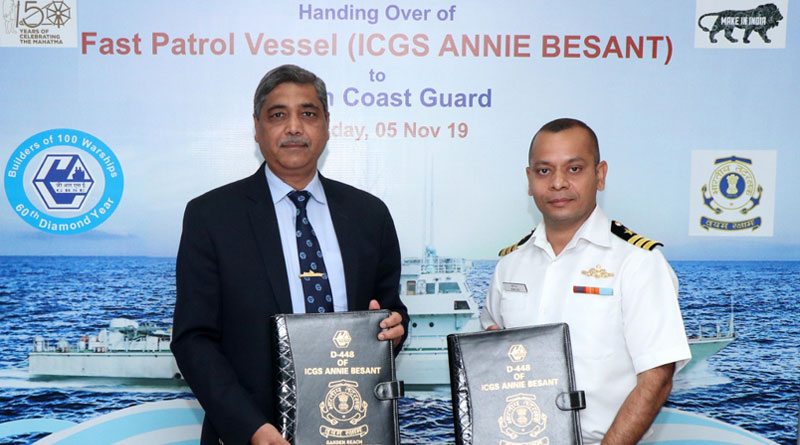 Second in the series of five Fast Patrol Vessel (FPV) to the Indian Coast Guard, the FPV is a medium-range surface vessel with a displacement of around 308 T

Garden Reach Shipbuilders and Engineers Ltd., (GRSE), a leading warship building company in the country, delivered ICGS Annie Besant, second in the series of five Fast Patrol Vessel (FPV) to the Indian Coast Guard, on November 5. The Protocol of delivery and acceptance was signed between Rear Admiral VK Saxena, IN (retd), chairman & managing director, GRSE and Commanding Officer of the vessel, Commandant (JG) Sunny Deo, GRSE said in a statement.

The FPV is a medium-range surface vessel with a length of 50 m, a width of 7.5 m and a displacement of around 308 T and is capable of operations in the maritime zones of India. These powerful, fuel-efficient platforms are designed to perform multipurpose operations like patrolling, anti-smuggling, anti-poaching, and rescue operations. The vessel is designed for a maximum speed of 34 knots with an endurance of more than 1500 nautical miles. She is equipped with 03 main engines of MTU make and built up at GRSE with advanced control systems, ‘Water Jet’ units and an ‘Integrated Bridge System’ integrating all communication and navigation systems.


The ship is also fitted with 40/60 gun as the main armament and will also have improved habitability features with fully air-conditioned modular accommodation for 35 personnel. The entire design of these FPVs has been developed in-house by GRSE as per requirements specified by Indian Coast Guard. The FPV designs which are exclusive to GRSE are an improvisation on the Inshore Patrol Vessels (IPVs) built by the shipyard for the Indian Coast Guard, few years ago.

GRSE currently has a strong order book position of around Rs 27, 400 crores under which there are a total of 22 warships at various stages of construction. At present, the company has six projects that are under way viz., five projects of the Indian Navy and one of the Indian Coast Guard. “GRSE is aggressively pursuing the new request for proposals (RFP) that have been issued by the ministry of defence. GRSE has responded to the RFPs for two Pollution Control Vessels (PCVs) and eight Fast Patrol Vessels (FPVs) for Indian Coast Guard. GRSE is also preparing response to RFPs for construction of 12 Air-Cushion Vehicles (ACVs) for Indian Coast Guard and Indian Army and the major project for construction of six New Generation Missile Vessels (NGMVs) for Indian Navy,” the company said in a statement.