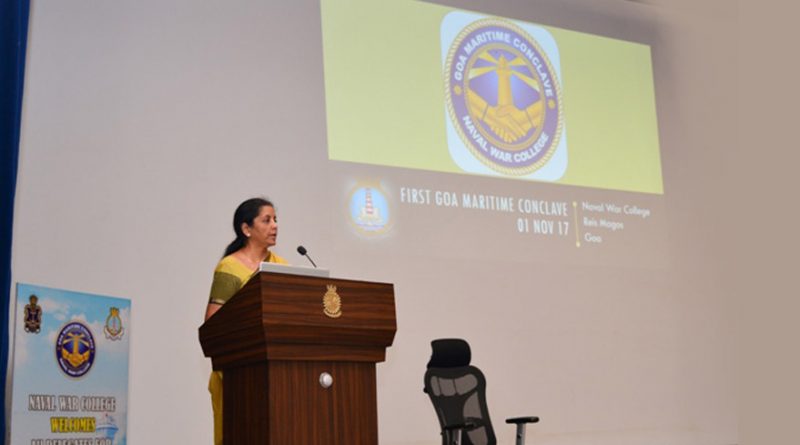 Delivering the key note address the Raksha Mantri said that the Goa Maritime Conclave (GMC) aims to bring together like minded nations to evolve and formulate collective responses to emerging challenges in the maritime domain. It would also provide an opportunity to communicate our viewpoints in a forthright manner and collectively shape a favourable maritime environment for all countries in the region. She further said that the IOR has progressively gained centre-stage largely due to the political impact of its regional dynamics on international geo-politics. One can claim with considerable assertion that the future of the world will be shaped, to a large extent, by the political and economic interactions between the stake holders in the IOR, she added.


She further stated that “Whilst it is good that the compulsions of globalisation have enabled economics to shape transactional relationships between nations, opaqueness in strategic intent and incoherent behaviour by certain nations are preventing these very relationships from evolving beyond their transactional nature. On land, the unresolved borders and riparian disputes which are predominantly a legacy of the colonial era are some of the key causes of conflict. Further, this impasse in international relationships, is a product of many causes such as ideological differences, political insecurities, economic dependency, technological dependencies, inequitable access to resources, geographical imperatives etc. The net impact of these differences is that trust deficit and tensions between nations continue to persist, on account of perceived challenges to sovereignty, despite positive economic interactions between them. As international behaviour in the maritime medium is influenced considerably by land based imperatives, cordially or latent hostility prevalent amongst countries on land tends to be reflected in the seas”.

Concluding her address the Raksha Mantri recommended the following to be deliberated during the GMC:-

While delivering the inaugural address, Admiral Sunil Lanba, Chief of the Naval Staff thanked her to have graced the occasion. He also thanked all the delegates whose presence reaffirmed the bonhomie that is shared by the navies and innate friendship that prevails amongst the nations. The CNS, however brought out that there is a perceptible lack of formal arrangements with respect to engagement between littoral navies of the south and south eastern IOR and the concept of GMC has been evolved to bridge this gap and to establish a regional maritime forum amongst like-minded navies of the region for the apex level dialogue.

The Admiral further stressed on creation of comprehensive infrastructure, equipping the force with technology and investing in quality training while exercising financial prudence. He also said that by making large and long term financial commitments to counter specific threats from perceived adversaries may not necessarily yield the desired results in the future. Instead it would be wiser to adhere to long term plan which is underpinned by a clear assessment of desired capabilities. The CNS concluded with remarks that we hope to consolidate the progress made so far and shape a way ahead for greater maritime cooperation in the region.