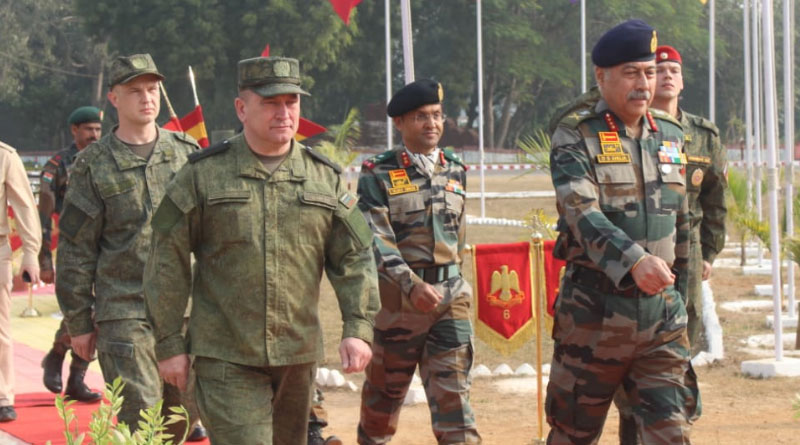 Russian ships in Goa participating in INDRA 2019, the second edition of the tri-services exercise between the Indian and Russian armed forces

The Russian Federation Navy (RuFN) ships Yaroslav Mudry, Viktor Konetsky and Elyna arrived at Goa on 10 December 2019 to participate in INDRA 2019, the second edition of the tri-services exercise between the Indian and Russian armed forces. The Naval component of the exercise is being conducted off Goa from 10 to 19 December 2019.

“The aim of the exercise is to enhance interoperability and develop an understanding in order to effectively tackle common security challenges,” said a statement from the Indian Navy. INDRA initially began as a bilateral naval exercise between the Indian and Russian Federation navies in 2003. The exercise has now assumed a tri-service scope with corresponding maturity and gradual increase in complexity and level of participation.


The statement from the Navy said that this year, the naval component of the exercise would be held in two phases. The harbour phase would be held at Goa from 10 to 15 December 2019 and encompass planning conferences, professional interactions, cultural visits, sports fixtures and formal calls between Flag Officers and senior officers of the participating navies. The Sea Phase of the exercise would be conducted in the Arabian Sea from 16 to 19 December 2019. The focus area for the exercise at sea would be underway replenishment, air defence drills, surface firings, Visits Board Search and Seizure (VBSS) operations and other tactical procedures.

“Indian Navy would be represented by INS Aditya, a sleet Support Ship and INS Tarkash, a frontline Guided Missile Frigate. In addition, Dornier and P8I Maritime Patrol Aircraft, MIG 29 K Fighter Aircraft and other integral rotary wing helicopters would also participate in the exercise. The Indian Army will be fielding a Ghatak Platoon in the validation exercise on 18 December 2019, whereas an assortment of SU 30 MKI, Jaguar, Mi 17 helicopters and an Airborne Warning & Control System (AWACS) aircraft will be participating from the Indian Air Force, the statement from the Navy added.

“Tri-Services Exercise INDRA 2019 would help further strengthen mutual confidence and interoperability and also enable sharing of best practices between the armed forces of both countries. The exercise will be yet another milestone in strengthening security cooperation and will serve to reinforce the long-standing bond of friendship between India and Russia,” said the Indian Navy statement.