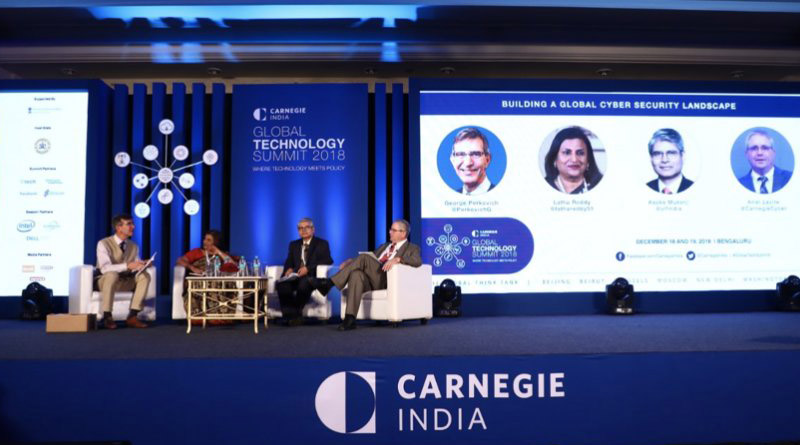 Carnegie India held its third edition of the Global Technology Summit in Bengaluru from December 17 to 19. This year’s Summit focused on the theme, Technology and Society: Getting the Balance Right.

In addition to the public conference, Carnegie India also conducted workshops for students on December 17, 2018. The aim was to provide a platform for students to directly engage in conversations on and around the benefits and risks of emerging technologies.

The summit opened on December 18 with welcome remarks by Rudra Chaudhri, Director Carnegie India and Kiran Mazumdar-Shaw, Managing Director, Biocon. This was followed by a keynote address by A. Gitesh Sarma, Secretary (West), Ministry of External Affairs (GOI).

The first module was titled “Technology and Diplomacy” and was chaired by C. Raja Mohan, Director, Institute of South Asian Studies at the National University of Singapore. Gitesh Sarma, Henr Verdier, Ambassador for Digital Affairs, France and Ariel Levite of Carnegie Endowment for International Peace debated the crucial aspect of technology and how it impacted diplomacy.


This was followed by a session on “Data Flows in the Digital Age”. The session debated India’s proposed data protection regime and an Asian approach to privacy in the form of APEC Cross Border Privacy Rules system and its European counterpart – the General Data Protection Regulation (GBPR).

The development of public digital payments framework in India was duly discussed in the “Changing World of Digital Payments” session. This was followed by a session titled “Artificial Intelligence and Everyday Life’ which saw the discussion focus on A.I. and also touch upon the sensitive topic of developing Artificial Intelligence based weapon platforms.

The summit ended with a discussion on how to create a safer world with all the new evolving technology in society.