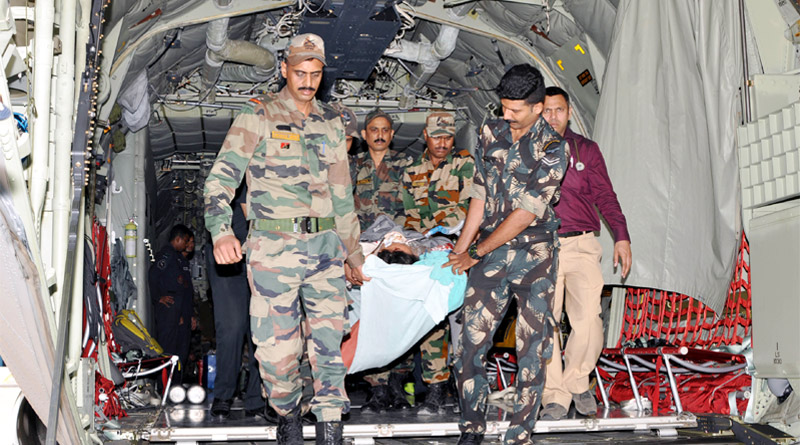 The French national, after getting injured in a motorcycle accident, was successfully transferred to a hospital in New Delhi

On a road trip at Leh, Bresson Florence and her husband Christophe were on motorcycles when, in an accident, the 50-year-old French national lady was seriously injured. She was immediately taken to an army hospital nearby and then shifted to SNM hospital at Leh where she was shifted to the ICU. Her condition was critical while her husband Christophe suffered minor injuries.

The French Embassy in New Delhi placed an immediate request for the medical evacuation of the patient and a transfer to Chandigarh or Delhi, for further medical care. Thereafter, a C-17 Globemaster aircraft was prepared for launch with at Patient Transfer unit, a mobile ICU in itself, and enroute medicare personnel. Unfortunately, the weather at Leh in the afternoon hours on 16 August 2018 did not permit the aircraft to land.

Early morning on August 17, a C-17 aircraft, on a routine sortie, from Chandigarh landed at Leh with the Patient Transfer Unit, to which Brensson was transferred. Simultaneously a C-130 Hercules aircraft launched from Hindon reached Leh and took off with the patient accompanied by her husband and other Medicare personnel.

The evacuation of the casualty was successfully completed at 0925 hrs when the C-130 ac landed at Palam with the patient who was then transferred to a specialised hospital at New Delhi.

“It was an apprehensive moment for us when due whether we could not launch the aircraft last evening. Our medical fraternity was in constant touch with the doctors at Leh and at the first opportune moment both the aircraft were launched and mission executed successfully”, said the Air Officer Commanding Airforce Station Chandigarh, Air Cmde S Srinivasan AVSM VSM.