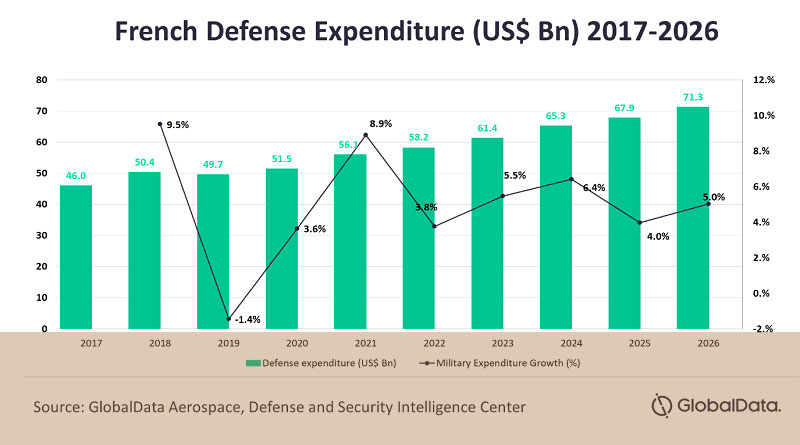 In its latest data revealation, GlobalData suggests that France’s defense expenditure has generally maintained an upward trend, barring a decrease in spending in 2019, increasing from US$46bn in 2017 to US$56.1bn for 2021.

GlobalData’s latest report, ‘French Defense Market – Attractiveness, Competitive Landscape and Forecasts to 2026’, states that despite the global economic slowdown and pressure of mitigating the impact of COVID-19, France’s budget expenditure will continue to increase as government spending aligns with President Macron’s commitment to bolster the French defense apparatus.

Vera Lin, Associate Aerospace and Defense Analyst at GlobalData, says, “Changes in France’s geopolitical scenario, such as threats to international security including jihadist activity in Sahel and the return to great power competition against Russia and China, has also affected the reinforcement of a national security strategy that aims to protect the country’s sovereignty and global military position.”

The French defense budget has allocated US$15.4bn for acquisitions, which is the highest since 2017, US$11.7bn under operation and maintenance (O&M) expenses and other defense funds, including personnel expenses total a sum of US$29bn. The Armed Forces’ total budget increase features a 5.05% compound annual growth rate (CAGR) over the period 2017 to 2021. GlobalData forecasts that military expenditure will continue to rise, reaching US$71.3bn by 2026.


Lin adds, “Spending for 2021 remains above 2% of GDP, which is the target defense budget commitment. However, the increase in spending is partly attributed to the need to stimulate the economy in response to COVID-19 through major procurement programs having strong French industrial participation, such as the Barracuda class Nuclear-Powered Attack Submarines, VBMR Griffon and the Rafale F4.”

The French economy is expected to be strongly impacted by COVID-19, with GlobalData’s COVID-19 Economic Recovery Scorecard ranking France 31 out of 35 countries, estimating a slow recovery period from the pandemic.

In response, the French government has accelerated procurement to stimulate the recovery of the aerospace sector. Major weapons programs in 2021 and ongoing programs across the armed forces will continue to support the defense industry. For instance, the Ministry of Armed Forces has announced the early procurement of platforms such as the A330-MRTT, ISTAR aircraft, H225M helicopters and the VSR700 unmanned aerial vehicle.

Additionally, there was also the recent January order of 12 Rafales to replace units sold to the Hellenic Air Force and the 3 MRTT Phenix tanker aircrafts for the air force, the delivery of 150 Griffon armored vehicles, 20 Jaguar armored vehicles for the army and the FREMM multi-mission frigate. Another recent example is the December 2020 presidential announcement for a next generation aircraft carrier program to replace the Charles de Gaulle by 2038, alongside major maritime programs such as the Barracuda-class submarine and the next generation ballistic missile submarine (SNLE 3G).

Lin adds, “Continued great power competition between the US and China has contributed to rising uncertainty in international security. France’s defense policy under President Macron’s vision of strategic autonomy also refers to building and maintaining a full-spectrum military. In practise, the concept refers to the capability to navigate all domains of warfare without the need to depend on a great power ally such as the US and to develop a framework for regional European defense. France is hedging against uncertain security situations as it increases platform modernization and innovation across services.”