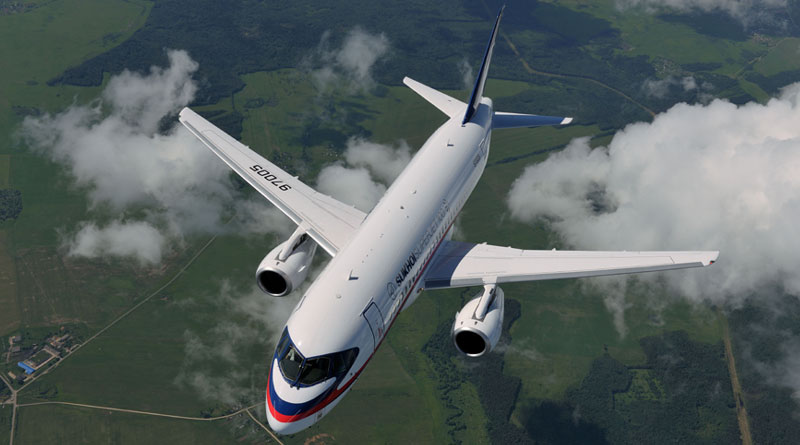 The programme consisted of the examination of take-off and landing performance, stability and manageability, flight control systems, lights and VNAV

At the aerodrome situated in Zhukovsky, the flight test programme of the SSJ100 with the horizontal wing tips was successfully completed, the Russia based manufacturer Sukhoi Civil Aircraft Company has announced. The company said the two SSJ100 with the manufacturer serial numbers 95032 and 95157 with the horizontal wing tips took part in the testing. One of them had ice simulators of special shape on the leading edge and the empennage.

“In accordance with the test programme, more than 140 flights were conducted. The flight programme consisted of the examination of the take-off and landing performance, stability and manageability, flight control systems, lights, VNAV. There were tests performed for strength, flights for high speeds, critical angles and cat. I, II, IIIa (take-off/landing) and also in modes for the fuel consumption analysis at different stages of flight carried out,” the statement by the company said.

The saber-like configuration of the tips installed on to the Sukhoi Superjet 100 turned out to be the result of a number of research, engineering and experimental activities carried out by the Sukhoi Civil Aircraft Company (UAC subsidiary) with the assistance of Central Aerohydrodynamic Institute (TsAGI).

“The geometry of the tips was determined with the implementation of the innovative methods of 3D optimisation based on numerical computation called Computational Fluid Dynamics (CFD) – the unique TsAGI know-how used in Russian aviation industry in particular for Sukhoi Superjet 100 program,” the statement added.


“Sukhoi Superjet 100 is a dynamically developing programme. The installation of the saberlets allows to simultaneously improve the take-off and landing performance. Moreover, fuel effectiveness will improve. Customers will be able to decrease the fuel consumption for no less than 4%”, as noted by minister for industry and trade of Russian Federation Denis Manturov.

“Sukhoi Civil Aircraft Company is consequently implementing the Sukhoi Superjet 100 improvement programme aiming at market expansion and the increase of the number of customers, the current operator’s satisfaction level growth and the maintenance of the high competitive level of the product. The wing tips installation being the part of the improvement programme will provide the operators with cost cut up to 10 000 000 rubles per year per one SSJ100”, underlined director general of the Sukhoi Civil Aircraft Company, Ravil Khakimov.

The completion of a full-scale programme of ground and flight tests will result in the certification of the SSJ100 with the horizontal tips – saberlets and they will be offered as an option to the customers and the operators. The installation of the tips is possible not only to new aircraft but to the already delivered aircraft as well.

Saberlet kits are manufactured by Voronezh aircraft manufacturer (VASO), which belongs to UAC Transport Division. The kits are made of modern composite materials produced and certified in Russia and abroad.