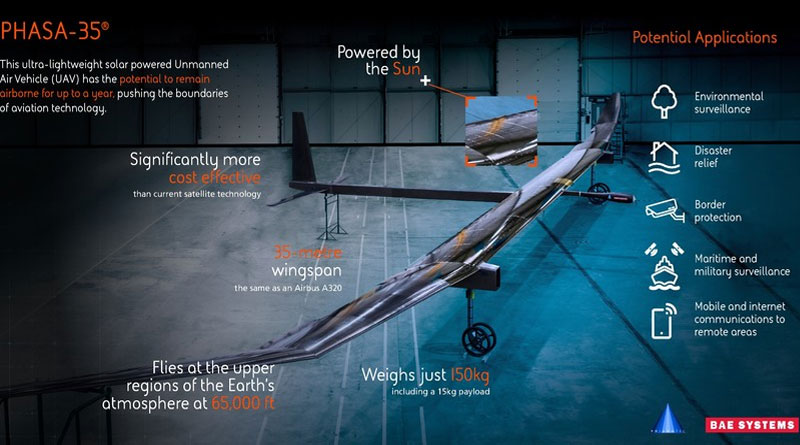 Persistent High Altitude Solar Aircraft (PHASA-35), which has the potential to stay airborne for a year has completed its maiden flight. The trials marked the first fully integrated flight test of the PHASA-35 system, delivering rapid proof of capability from design to flight in just 20 months.

The aircraft is a result of collaboration of British experts from Prismatic in Hampshire- where two full-sized concept aircraft were built last year, working alongside BAE Systems engineers in Lancashire, where the aircraft underwent further integration testing prior to flight trials.

PHASA-35, a 35m wingspan solar-electric aircraft has plugged the gap between aircraft and satellite technology. It is  designed to provide a persistent, stable platform for monitoring, surveillance, communications and security applications.

It can be useful for both, military and commercial purposes. The UAV also has the potential to be used in the delivery of communication networks including 5G, as well as provide other services, such as disaster relief and border protection, at a fraction of the cost of satellites.


Deigned to operate unmanned in the stratosphere, above the weather and conventional air traffic, PHASA-35 is a persistent and affordable alternative to satellites combined with the flexibility of an aircraft. It can be used for a range of applications including forest fire detection and maritime surveillance.

As a High Altitude Long Endurance (HALE) vehicle, PHASA-35 is powered by the Sun during the day and by batteries overnight. The long-life battery and highly efficient solar technology could allow the aircraft to maintain flight for up to a year operating in the stratosphere, the upper regions of the Earth’s atmosphere.