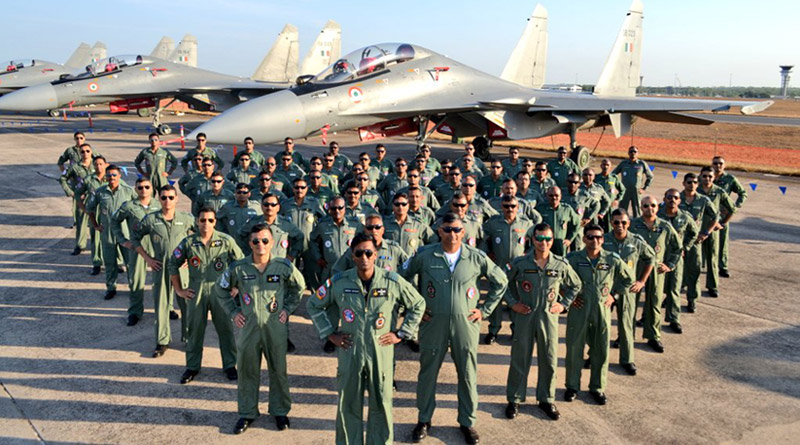 Hosted by the Royal Australian Air Force (RAAF), Exercise Pitch Black is a biennial multi-national large force employment warfare exercise. This year, the RAAF hosted it from July 24 to August 18 in Darwin, Australia. Earlier, the Indian Air Force (IAF) had participated in the exercise as observers but this was for the first time that the IAF participated with air assets in Exercise Pitch Black (PB-18). With 16 nations participating and more than 140 aircraft, the current edition was the largest Pitch Black ever conducted by Australia. The contingent of the IAF consisted of 145 air-warriors including IAF Commandos team, Garuds, 04 X Su-30 MKI, 01 X C-130 and 01 X C-17 for logistic support for induction and de-induction. The contingent assembled at Air Force Station Kalaikunda and departed for the exercise on 19 Jul 18 from India to Australia via Indonesia. The contingent was led by Group Captain CUV Rao.

This exercise aims to foster closer relationship between the participating friendly forces and to promote interoperability through exchange of knowledge and experience. The aim for participating crew and specialist observers was to expose them to op environment in international scenarios. The exercise comprised of 2 phases, first being the Force Integration week. During the Force Integration week, the forces flew basic missions with an aim to get to same working platform. Subsequently the missions involved larger packages & we undertook simulated air combat exercises in near realistic environment and exchanged best practices towards enhancing our operational capability.

Exercise Pitch Black 2018 provided a unique opportunity for exchange of knowledge and experience with the participating nations in a dynamic warfare environment. The IAF contingent interacted with various countries, gained first-hand experience of training patterns, employment and operating philosophies of their combat assets.

The professionalism and work ethos of IAF Pilots, technicians, Airmen and all participating Air-Warriors earned praises from all quarters. The Operational lessons learnt by IAF during the exercise will assist IAF in adding more teeth to its overall war waging capabilities and assist us in better joint man ship with the friendly Nations. IAF has de-inducted from Darwin, Australia and has reached Malaysia on its return journey to India.