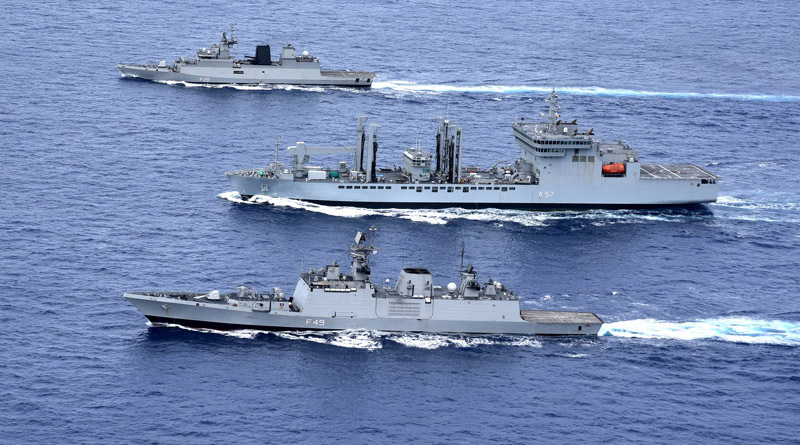 Under the command of Rear Admiral Flag Officer Commanding, Eastern Fleet, Dinesh K Tripathi, three Indian Naval ships Sahyadri, Shakti, and Kamorta are on an overseas deployment to South East Asia and the Western Pacific. The ships will be participating in the 22nd edition of Exercise Malabar, off Guam, USA from June 7 to June 16. Scheduled to reach Guam on June 7 for the Harbour Phase, this is the first time the Malabar Exercise is being conducted off Guam, a territory of the United States. In 2017, Malabar was held on the Eastern Sea Board of India, off Chennai and Visakhapatnam. Malabar 2018 will see participation from the navies of India, Japan, and the United States.

The Malabar Exercise has grown in its scope and complexity over the last 26 years. The exercise aims to address the plethora of shared threats and challenges to maritime security in the Indo-Pacific region. Exercises like Malabar further contribute towards increasing the levels of mutual understanding, interoperability, and sharing between the three navies.

MALABAR-18’s schedule consists of professional interactions during the Harbour Phase in Guam from June 7 to June 10. The Sea Phase from June 11 to June 16 including a diverse range of activities at sea including Aircraft Carrier operations, Anti-Submarine Warfare (ASW), Air Defence, Surface Warfare, Visit Board Search and Seizure (VBSS), Joint Maneuvers and Tactical procedures.