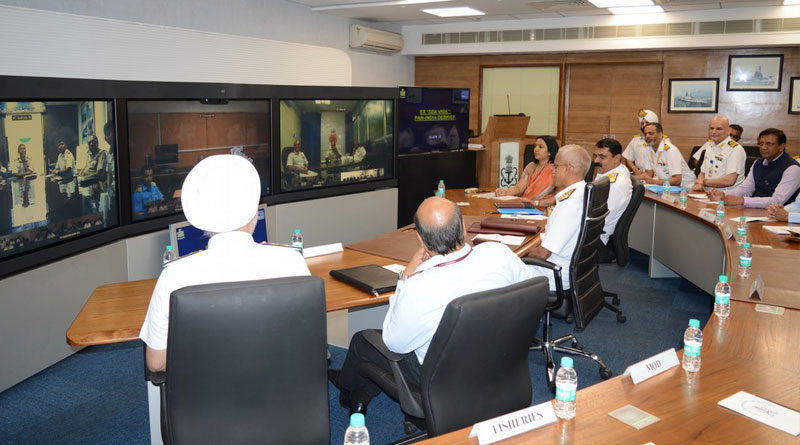 The Indian Navy conducted debrief of the maiden national level coastal defence exercise Sea Vigil, which was conducted by the Indian Navy from 22-23 January 2019. The exercise witnessed the simultaneous activation of the coastal security apparatus across the country involving maritime stakeholders at the centre and all the 13 coastal states and Union Territories.

Held on 16 April 2019, the debrief was chaired by Vice Admiral MS Pawar, AVSM, VSM, the Deputy Chief of the Naval Staff and was attended by high functionaries of the Navy, Indian Coast Guard, central ministries/agencies and state governments/Union Territory Administration, including intelligence agencies. All relevant agencies from the field units in different states participated through teleconference.

The chairperson highlighted the significant achievements during the exercise and complimented all stakeholders for the progress made over last decade in the realm of coastal defence and security. He complimented the strong inter-agency coordination and interoperability achieved during the exercise and reiterated the need for flexibility and agility to deal with security challenges.

The Indian Navy also recently concluded a two-week long bilateral exercise with the Royal Australian Navy code-named AUSINDEX on April 14. The current edition of the exercise had the participation of the highest number of units thus far with four frontline ships with integral helicopters, one submarine and a variety of aircraft including P-8I and P-8A long-range Maritime Reconnaissance Anti-Submarine Warfare (ASW) aircraft took part from both navies. For the first time, 55 American and 20 New Zealand military personnel embarked onboard the RAN ships and witnessed the exercises during AUSINDEX-19.


According to an official statement from the Indian Navy, exercise AUSINDEX was aimed towards “strengthening and enhancing mutual cooperation and interoperability between the IN and RAN, providing opportunities for interaction and exchange of professional views between the personnel of the two navies.”

The exercise was undertaken as a part of the ongoing overseas deployment of eastern fleet ships to South East Asian countries. Indian Navy’s war ships Kolkata and Shakti participated in the annual exercise, comprising a harbour and a sea phase, the statement released by the Indian Navy said.

“Conduct of the bilateral exercise on an annual basis would give a further fillip to the existing strong bilateral relation between the two countries,” the Indian Navy added.

The statement further said the Navy to Navy cooperation involves a Composite Training Programme in the fields of submarine, aviation and dockyard training. The two countries have also signed an agreement to exchange White Shipping Information and have a running ‘Information Sharing’ programme.