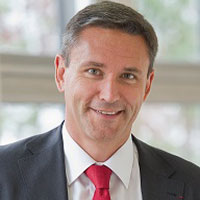 Over the past 20 years Eric has worked in a number of senior positions in Airbus Defence and Space, and most lately led Global Communications Company OneWeb

The European defence company, MBDA, has appointed Eric Beranger as the new Chief Executive Officer, with effect from 1 June 2019, replacing Antoine Bouvier. Over the past 20 years Eric has worked in a number of senior positions in Airbus Defence and Space, and most lately led Global Communications Company OneWeb.

Commenting on the development, Eric Beranger said, “Having delivered growth, innovation and transformation in high technology businesses, it is an honour for me to be joining MBDA, a truly world-leading European missile systems company. As a champion of European industrial integration, I am looking forward to bringing all my knowledge, experience and energy to MBDA – the benchmark of successful European integration within the defence sector.”


MBDA Chairman Chris Boardman said, “Eric joins MBDA with an excellent track-record and we wish him a very warm welcome. Antoine has led MBDA through more than a decade of business growth and his personal commitment and contribution has ensured the continued development of MBDA as a global player and European champion in the field of missiles and missile systems. On behalf of the MBDA Board and the Executive and Management Committees I would like to thank Antoine for all his achievements and wish him every success in his new role.”

The outgoing CEO Antoine Bouvier expressed his gratitude to his team saying, “This is an emotional departure for me and I want to thank all the teams in each of our domestic countries who have, through their work and commitment, enabled us to turn this group into a model of European cooperation and integration. I am confident that Eric, together with the MBDA Board and the Executive team, will continue to pursue this successful strategy.”