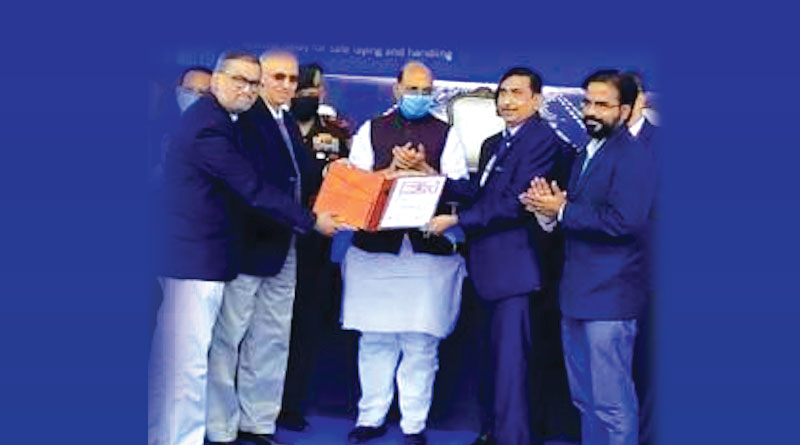 Godrej & Boyce, the flagship company of the Godrej Group announced that its business, Godrej Precision Engineering received the coveted Licensing Agreement for Transfer of Technology (LAToT) for the Mechanical Mine Layer, Self Propelled (MML – SP) from the Ministry of Defence’s DRDO Laboratories at the ‘Bandhan’ ceremony at Aero India 2021. Defence Minister Rajnath Singh, Chief of Defence Staff General Bipin Rawat, three Services Chiefs, Secretary Department of Defence R&D and Chairman DRDO Dr G Satheesh Reddy and Secretary (Defence Production) Raj Kumar along with other senior officials from Ministry of Defence and Karnataka Government and industrialists from the entire country were present.

The MML-SP has been designed for laying Anti-tank Bar Mines in varying soil conditions, camouflaging and recording their position accurately. It would play a crucial role in the defence and protection of India’s borders. Godrej Precision Engineering’s state of the art production facilities, stringent quality control and testing systems, coupled with decades of experience in building several ‘first-in-India’ products for defence applications will enable quicker roll out and induction of this product.

Defence Minister Rajnath Singh in his address to the public said that Bandhan exemplifies the spirit of ‘public-private partnership’. He added that the fountain head of any capability emerges from its foundation and the foundation of our vision rests on three pillars namely, research and development, public and private defence production and defence export. He mentioned that with an aim of encouraging the manufacture of defence related items in India, our endeavour will remain to bring down the defence imports by at least two billion dollars by 2022. He highlighted that the negative list of items for import is also meant to provide opportunity to the domestic manufacturing sector to strengthen their base and contribute to Atmanirbhar Bharat.

Scientist G and Director DIITM, DRDO HQrs Mayank Dwivedi, added, “Godrej has been an important industry partner in various programs/projects of DRDO. DRDO values its contribution in various projects/programs. DRDO is confident that this LAToT will not only greatly strengthen the home-grown defense manufacturing capability of our country, but also will strengthen this partnership spanning a few decades.”

Chief Operating Officer, Industrial Products Group, Godrej & Boyce Kaustubh Shukla said, “We are proud to have partnered with the DRDO for more than three decades, and are deeply honoured by their confidence in us for manufacturing such a critical system. We have always considered it our foremost and sacred duty to contribute towards the defence of our Nation using our state-of-the-art technology coupled with our decades of expertise in this area. This LAToT for the Mechanical Mine Layer – Self Propelled will further strengthen our partnership with them, and we remain committed to achieving an Atmanirbhar Bharat.”

Godrej Aerospace, another business of Godrej & Boyce works closely with DRDO for developing mission critical systems. The business has the rare honour of having received the Defence Technology Absorption Award twice, first for developing Brahmos Airframes and the second time for Power Take Off (PTO) shafts for LCA.

The association with DRDO is beyond just defence equipment. During the pandemic, Godrej developed and delivered Proportional Solenoid Valves- a critical component for making ventilators.