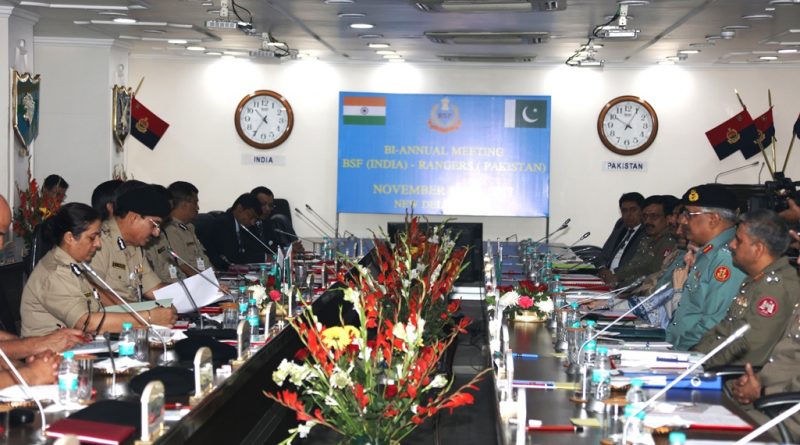 Timely exchange of information, simultaneous coordinated patrolling among other issues discussed during the bi-annual talks

The DG-level talks between Border Security Force (BSF) and Pakistan Rangers concluded on November 10 in New Delhi. Both the sides stressed on the need for cooperation to maintain the sanctity of the borders.

The talks witnessed the Indian side taking up specific issues of concern including incidents of unprovoked cross border firing, smuggling of narcotics, infiltration attempts, tunneling and defence construction activities. The issue of inadvertent crossing over by the border population and ways to facilitate their return on both the sides was also discussed. It was also agreed upon in deliberations that utmost caution and care should be exercised in dealing with the civilians.


The need for timely exchange of information at the field level with increased frequency of field commanders level meetings, simultaneous coordinated patrolling,  etcetera were also discussed.

Both the sides mutually agreed to hold the next round of talks in Pakistan. The talks ended with both sides agreeing on constant endeavor to maintain peaceful and tranquil borders.

Pertinently, during the Home Secretary Level Talks held at Islamabad, Pakistan in May 1989, it was decided that officials of the Border Security Force (BSF) and Pakistan Rangers would hold bi-annual talks and review the implementation of the agreed norms of cooperation between the two Border Guarding Forces.