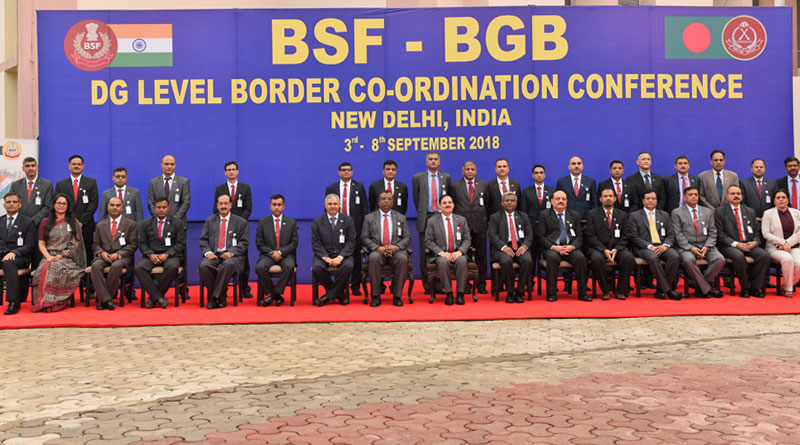 The DG-level talks between BSF and BGB included mutual agreements, status updates, and plans for further cooperation in curbing illegal crossings, human trafficking, violence, and contraband smuggling across the IB

The DG-level talks witnessed both sides taking up specific issues of concern including the prevention of illegal border crossings, arms smuggling, human trafficking, and smuggling of narcotics, among others. The issue of inadvertent crossing over by the border population and ways to facilitate their return on both the sides was also discussed. It was also agreed upon in deliberations that utmost caution and care should be exercised in dealing with the civilians


Director General BGB appreciated BSF’s procedures on using non-lethal weapons at borders as a means to bring down violence. Both sides agreed the need for joint efforts to augment the preventative measures taken by both BSF and BGB to curb illegal crossings and border violence.

DG BSF sought further cooperation from BGB to eliminate remnant Indian Insurgent Groups (IIG’s). Responding to DG K K Sharma’s concerns, DG BGB informed that there were no IIG’s hideouts inside Bangladesh and clarified that “Bangladesh does not allow its soil to be used by any entities or elements hostile to any country”.

Both sides agreed by that willful violation of the sanctity of the International Border (IB) would be dealt with as per respective Law of the Land and inadvertent crossers would be handed over to the concerned border guarding force immediately along with a mutual agreement to take strong measures for preventing of illegal border crossing and human trafficking. Both the delegations agreed to aid victims of human trafficking and facilitate their early rescue and rehabilitation as per Law of the Land. Other discussions also included evaluating the results of ‘Crime Free Zones’ which were established along the border.

Both BSF and BGB expressed their satisfaction over the deliberations in the conference, which was meaningful and cordial, reflecting the friendly bilateral relations between the two countries and it was decided that next DG-level conference would be held in Dhaka in the month of March/ April 2019.