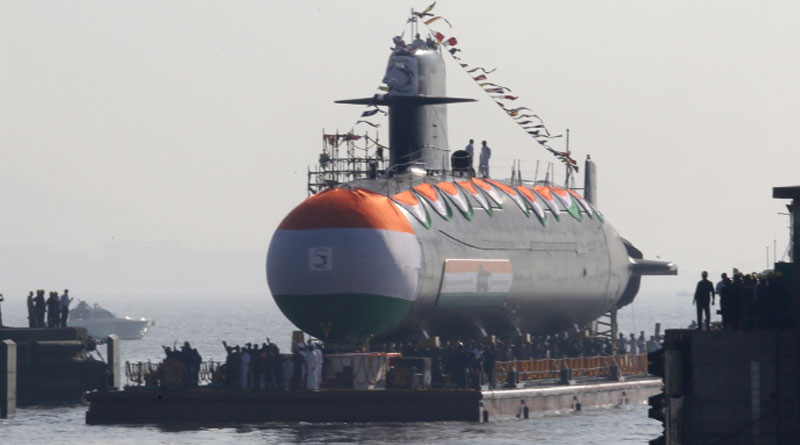 He will oversee the commissioning of second Scorpene submarine Khanderi and the largest dry dock of the Indian Navy, besides the launch of first P-17A frigate

The Indian Navy on September 17 said it will be inducting second Scorpene submarine Khanderi on 28 September 2019 in Mumbai. The event which will be attended by defence minister Rajnath Singh will also witness the launch of the first P-17A frigate Nilgiri and the commissioning of the largest dry dock of Indian Navy, the Vice Chief of the Indian Navy, Vice Admiral Ashok Kumar said while addressing a conference in New Delhi.

“With these three events, you will find that the Indian Navy’s combat potential, with ability to enhance its reach and sustenance will all go up tremendously,” the Vice Admiral Ashok Kumar said.

The six Scorpene submarines of the Indian Navy are being manufactured by the Mumbai-based Mazagon Dock Limited (MDL), together with Naval Group of France, the contract for which was signed in 2005 worth USD 3.75 billion. The project suffered inordinate delays and the first submarine of class Kalvari joined service in December 2017. In response to a question, the vice admiral said the issues like excessive noise being made by the submarine were resolved. He said the remaining four submarines were on schedule and will be commissioned on time. The six submarines, he said, will cost around Rs 25,000 crore.


“Any ship or submarine building activity is indeed a huge challenge. It’s a technological challenge, and plus, the complexity of the platform itself will ensure that there are many MSMEs, companies and others, who are involved in ensuring a successful completion of the construction,” the Vice Chief of Indian Navy said.

The naval dry dock, which will be the largest in the country, will be capable of docking the largest ship of Indian Navy, the Vikramaditya. “The dock will enhance our ability to maintain and support ships for decades to come,” he added.

Answering a question on whether the Indian Navy will seek more funds for the submarine programme, the Vice Chief said they are going to need it. He said on the capital budget, in 2012-13, the Navy had a 18 percent share in the capital budget, which had come down to 13.66 percent. Kumar said the Navy is demanding the budget to be increased in future.

The Vice Chief of Indian Navy revealed the cost of the aircraft carrier dry dock to be Rs. 1,320 crore, while the cost of the seven frigates under P-17A is over Rs. 48,000 crore.

The defence minister Rajnath Singh will also be present aboard the aircraft carrier INS Vikramaditya, in Mumbai. The minister will witness firing and operations on board the 47,000-tonne warship.