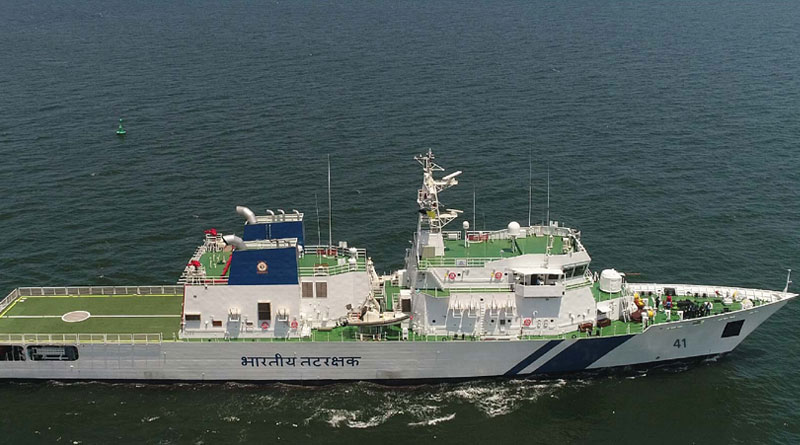 The 97m long, 15m wide, ICGS Varaha, the fourth of the series of seven Offshore Patrol Vessels (OPVs), is indigenously designed and built by L&T

L&T-built 51st defence vessel ICGS Varaha was commissioned into the service of Indian Coast Guard on September 25 at the hands of defence minister Rajnath Singh in Chennai.

“Demonstrating the unique track record once again and reemphasising commitment to Make-in-India and to Maritime security, ICGS Varaha, the fourth of the series of seven Offshore Patrol Vessels (OPVs), is indigenously designed and built by L&T,” L&T said in a statement.

“Alike the earlier three OPVs, ICGS Vikram (April 2018), ICGS Vijaya (August 2018) and ICGS Veera (February 2019), the fourth OPV ICGS Varaha (launched in Nov 2018) was also delivered ahead of schedule, within 17 months of delivering and commissioning of the lead OPV to yet again evidencing the Yard’s proven capability to concurrently build multiple warships. The fifth OPV named ICGS Varad, recently launched at the hands of Smt. Gargi Kaul, Secretary (Defence Finance) in August 2019 is getting finishing touches to ready for sea trials over coming weeks,” the statement added.


L&T was mandated by the ministry of defence for design and construction of seven OPVs in 2014. L&T became the first company in India’s private sector to deliver an in-house designed & built OPV to the Indian Coast Guard. The first OPV, ICGS Vikram had taken just 25 months from keel laying to completion – the shortest for any OPV in India, and in line with global benchmarks.

The OPV is approximately 97m long, 15m wide, has 3.6m draught, 2140 T displacement and has a range of 5000 NM. She can attain maximum speed of up to 26 knots. The entire design and construction process has been certified by American Bureau of Shipping and Indian Registrar of Shipping and overseen by the Indian Coast Guard’s resident team at Kattupalli.

“L&T’s modern greenfield shipyard at Kattupalli, spread over a sprawling 900-acre complex, is capable of undertaking simultaneous construction and refits of multiple ships and submarines under covered workshops. With our unique capability of design and engineering in-house, L&T has so far delivered Forty-Six Interceptor Boats and Four Offshore Patrol Vessels to the Indian Coast Guard and one mega sized Floating Dock to the Indian Navy,” the engineering giant said.

Commenting on the launch, S.N. Subrahmanyan, CEO and managing director, Larsen & Toubro, said, “Commissioning of ICGS Varaha at the hands of Raksha Mantri speaks volumes about the importance accorded by the government to the coastal security of our nation. L&T is proud to have designed and constructed 35% of the ships in service of Indian Coast Guard Fleet. On this historic occasion of inducting a L&T-built vessel for the Coast Guard into operational service, we reaffirm our commitment to deliver cutting-edge defence technology to our armed forces indigenously, innovatively and ahead of schedule.”

“ICGS Varaha is yet another example of the extraordinary results of L&T’s efforts to uphold the Make in India and Design in India initiatives of the government. We are uniquely positioned to offer a range of critical defence technologies with single point responsibility from design to platform specific equipment and systems to life-cycle support in the true spirit of ‘Make in India’. With major defence acquisition programmes already on the anvil, we are poised and look forward to enhance L&T’s contribution to the national defence significantly,” senior executive vice president & whole-time director (Defence), Larsen & Toubro, J.D. Patil, said.