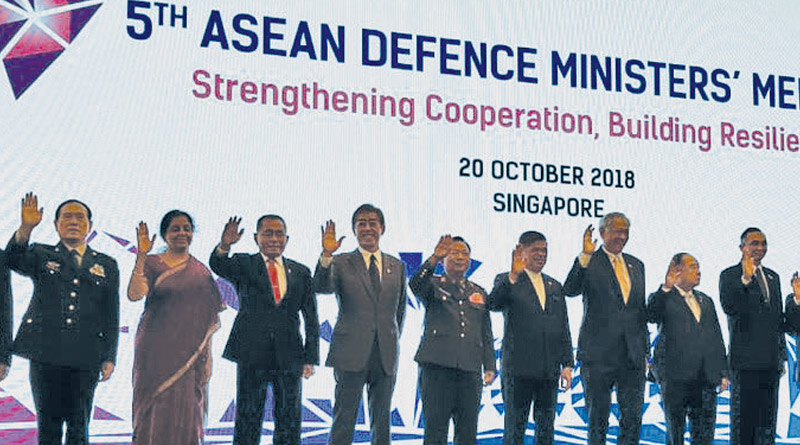 Defence minister Nirmala Sitharaman attended the 5th ADMM Plus (ASEAN Defence Minister’s Meeting) meet in Singapore on October 20, which is a forum for defence ministers from 10 ASEAN and eight ASEAN Plus countries. The theme of this year’s dialogue was ‘Strengthening Cooperation, Building Resilience’. The dialogue adopted two resolutions on ‘Countering the Threat of Terrorism’ and ‘Practical Confidence Building Measures’.

Speaking on the occasion, Sitharaman emphasised India’s concern on the grave challenges to international peace and stability due to the threat of terrorism. Condemning the use of terror as an instrument to further state policies, she conveyed that the interplay between states and non-state actors used as proxies to foment violence had worsened this menace

She also highlighted that the continued presence of terrorist infrastructure and support to terrorists in the immediate neighbourhood constantly tested India’s patience. As a responsible power, great restraint was being exercised by India in dealing with this menace. However, India had exhibited measures to disrupt and deter the activities of terrorist groups and their patrons and would not hesitate to do so again if required in the future.


Sitharaman reiterated India’s view on Indo-Pacific, as outlined by PM Narendra Modi, as an open, balanced region, connected by open and secure seas, integrated by balanced trade and shaped by a rules-based order, anchored in ASEAN centrality and conveyed India’s commitment to maintain a sustained focus of its ‘Act East’ policy in terms of economic, cultural and developmental engagement of the region.

Complementing the ADMM Plus for emerging as a credible and effective platform forging practical cooperation among the members of the armed forces, she informed the partners of India’s active participation in all the ADMM Plus mechanism contributing effectively to their success. India and Myanmar are the co-chairs for the expert working group for military medicine for this cycle and a standalone field training exercise on military medicine will be held in Lucknow in March 2019 along with the release of ASEAN military medicine handbook.

On the sidelines of the ADMM Plus meeting, Sitharaman also held constructive bilateral discussions with the secretary of defence, United States and defence ministers of Australia, Malaysia, Vietnam and the Philippines, Singapore, Russia, China, Thailand, Lao PDR, and Myanmar. Discussions were also held with the deputy Prime Minister of Singapore Teo Chee Hein.