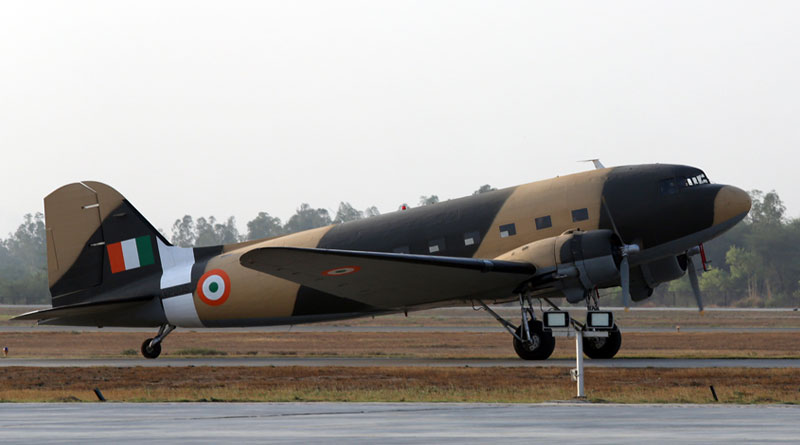 World War II era Dakota DC-3 VP 905 was formally inducted into the Indian Air Force (IAF) on May 4 at Air Force Station Hindon after flying across seven countries in commemoration of its service to the nation.

The fully refurbished vintage aircraft began its journey from the United Kingdom (UK) on April 17 this year and was flown by a joint crew of the IAF and Reflight Airworks. According to a defence statement, the aircraft flew a total of 9750 km during its ferry into India and made en-route halts in France, Italy, Greece, Jordan, Bahrain and Oman. The aircraft first landed at Air Force Station Jamnagar on April 25 and reached its final destination at Air Force Station Hindon on April 26.

“This historic flight of the Dakota DC-3 VP 905 across seven countries was a commemoration of the service provided by this venerable aircraft to the nation.  The arduous feat of traversing half the globe in nine days on an aircraft of this vintage is a tribute to the steadfast determination and professionalism of the crew, the unflinching support provided by the embassies of India in the countries en-route and the unwavering reliability of the old war horse,” the statement said.

On the final leg of its journey from Muscat to Jamnagar, the aircraft was escorted by a P-8I aircraft of the Indian Navy, a C-130J and the Su-30 MKIs of the IAF. At Air Force Station Hindon, a ceremony to honour the homecoming of the aircraft was held which was attended by the Chief of the Air Staff Air Chief Marshal Birender Singh Dhanoa, senior functionaries of the ministry of defence, diplomats from the High Commission of the UK, officers of the IAF, representatives from Reflight Airworks and veterans of the IAF who have operated the Dakota DC-3 VP 905