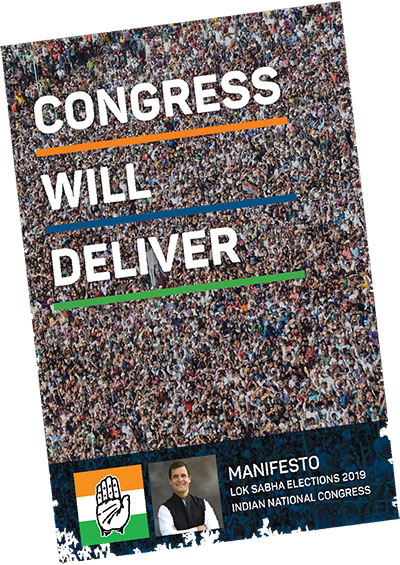 The Congress claims it has long held the view that dialogue is the only way to understand the aspirations of the people of the three regions of Jammu and Kashmir and find an honourable solution to their issues and promises.

The party says it will adopt a two-pronged approach: first, uncompromising firmness on the border and ending infiltration; and second, absolute fairness in dealing with the demands of the people and winning their hearts and minds.

Congress party also promises to review the deployment of armed forces, move more troops to the border to stop infiltration completely, reduce the presence of the army and CAPFs in the Kashmir Valley, and entrust more responsibility to the Jammu and Kashmir police for maintaining law and order.

The party wants to review The Armed Forces (Special Powers) Act and the Disturbed Areas Act in Jammu and Kashmir and promises to make changes in text of the laws to balance the requirements of security and the protection of human rights.

The party claims Jammu and Kashmir and its problems deserve a large-hearted approach that will eschew muscular militarism and legalistic formulations and look for an innovative federal solution. It promises to find such a solution through patient dialogue and talks with all stakeholders in the State.

Congress has promised the people of Jammu and Kashmir talks without pre-conditions. The manifesto claims the party will appoint three interlocutors drawn from civil society to facilitate such talks.

The Congress claims it will increase the strength of border guarding forces — BSF, SSB, ITBP and Assam Rifles — and post them on or close to the border to prevent infiltration, illegal immigration and smuggling.

The Congress has also promised it will accelerate the construction of border roads along all borders of India, especially, the India-China border. They plan to enhance the capacity of the Border Roads Organisation (BRO) and create separate divisions to build roads along the India-China and the India-Myanmar borders.

The Congress claims in its manifesto that the key to internal security is intelligence, analysis and quick response. The party had put in place the Multi-Agency Centre and the NSG regional hubs. It had also proposed to establish the NCTC and NATGRID. Now, it promises that NCTC will be set up within three months and NATGRID will be made operational by December 2019.

The party claims the most serious threats to internal security emanate from (1) terrorism, (2) infiltration of militants, (3) Maoism or Naxalism and (4) caste or communal violence. The Congress believes that each of these threats deserves a separate and distinct response.

The party promises an uncompromising approach and hard measures to put an end to terrorism and to the infiltration of militants.

In the case of Maoism, the Congress it will resolutely fight violent activities. At the same time, it says it will address developmental challenges in the areas concerned, enlist the support of the people and win over the Maoist cadres.

In the case of caste or communal violence, Congress claims it will put down such violence with a firm hand using the police forces at its command, apprehend the instigators and bring them to justice. There will be no room for self-appointed vigilante groups and moral policing brigades, says its manifesto.

Congress has also promised to work with State governments to increase the strength of State police forces, fill all vacancies, equip and train them, and deploy them impartially to maintain law and order and to detect and punish violators and instigators.

The Congress says it will increase the strength of the CAPFs to meet the growing requirements of border security and internal security. At any given time, an adequate number of battalions will be on rest, recuperation and training and will not be deployed on operational duties, it claims.

The party promises to ensure increased representation of women to achieve a minimum of 33 per cent in the force strength of CISF, CRPF and BSF. The party also claims every effort will be made to induct more women into the other border guarding forces, namely, ITBP, SSB and Assam Rifles.

The party also plans to enhance the facilities of health, education and housing for the personnel of the CAPFs and their families to bring them on par with the facilities provided for the armed forces. ‘We will set up schools on the model of Sainik schools to enhance educational opportunities for their children,’ it says in the manifesto.

The Congress promises to enhance the status of the jawan and the benefits to the families of jawans in cases where the jawan dies in action. In addition, a Committee to draft new Service Rules for personnel of the CAPFs will also be set up.

The manifold challenges of internal security, and how the government plans to tackle it

The BJP’s 2014 manifesto reiterated the cornerstone of India’s policy on Jammu and Kashmir – that the state would remain an integral part of the Union of India.