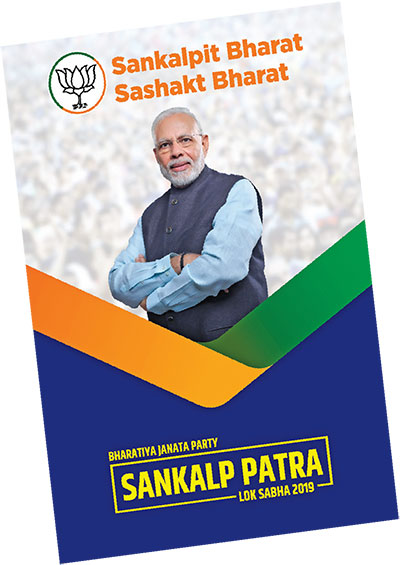 In the last five years, BJP claims to have made all necessary efforts to ensure peace in Jammu and Kashmir through decisive actions and a firm policy. They say they are committed to overcome all obstacles that come in the way of development and provide adequate financial resources to all the regions of the state. The BJP has reiterated its position since the time of the Jan Sangh for the abrogation of Article 370.

The BJP is committed to annulling Article 35A of the Constitution of India as it feels the provision is discriminatory against non-permanent residents and women of Jammu and Kashmir. The party believes that Article 35A is an obstacle in the development of the state. The BJP claims it will take all steps to ensure a safe and peaceful environment for all residents of the state. It says it will make all efforts to ensure the safe return of Kashmiri Pandits and will provide financial assistance for the resettlement of refugees from West Pakistan, Pakistan occupied Jammu and Kashmir (POJK) and Chhamb.

The BJP’s manifesto claims there has been a huge change in the cultural and linguistic identity of some areas due to illegal immigration, resulting in an adverse impact on local people’s livelihood and employment. The BJP claims it will expeditiously complete the National Register of Citizens (NRC) process in these areas on priority. In future the BJP aims to implement the NRC in a phased manner in other parts of the country

The BJP says it will continue to undertake effective steps to prevent illegal immigration in the Northeastern states. For this, they aim to further strengthen our border security. A pilot project on the use of technology to strengthen border security (Sma Fencing) was implemented in Dhubri (Assam). The BJP wants to implement this on all borders.

After effectively strengthening coastal security through implementation of a coastal security scheme to provide modern equipment and allocating funds to the states for establishing coastal police stations, establishment of National Committee for Strengthening Maritime & Coastal Security, Island Information System and National Academy of Coastal Policing, the BJP will continue to take steps for ensuring security of India’s long coastline.

The BJP claims to have already taken strong actions to reduce LWE to a very large extent and limited them to small pockets. They say they are committed to combating LWE and eliminating it in the next five years. In the last five years, the party claims to have focussed on the development of economic and social infrastructure such as roads, mobile towers, schools and medical facilities in the tribal areas affected by LWE and aims to continue to make efforts in this direction.

The BJP has promised to modernise the Central Armed Police Forces (CAPF) to further increase their capacity and readiness and enable them to effectively combat internal security challenges. They have promised to provide assistance to the states to upgrade their police forces through the ‘Scheme for Modernization of Police Forces’. They say they will encourage expedited police reforms in the states so as to enable the State police forces to deal with new types of crimes like cybercrime and help them to be more sensitive to the citizens, especially the weak and vulnerable sections of the society.

The manifold challenges of internal security, and how the government plans to tackle it

The BJP’s 2014 manifesto reiterated the cornerstone of India’s policy on Jammu and Kashmir – that the state would remain an integral part of the Union of India.

Jammu and Kashmir
The Congress claims it has long held the view that dialogue is the only way to understand the aspirations of the people of the three regions of Jammu and Kashmir and find an honourable solution to their issues and promises.