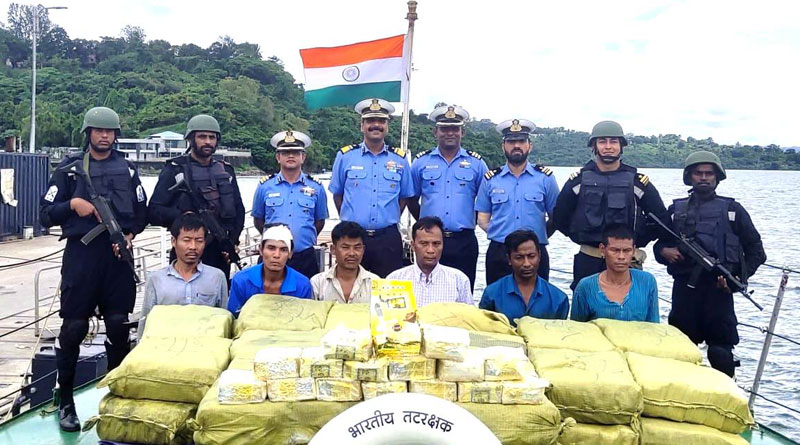 The Indian Coast Guard aircraft on routine surveillance sighted a suspicious vessel operating in Indian Exclusive Economic Zone, which was not responding on VHF

The Indian Coast Guard Ship Rajveer in a sea-air coordinated operation seized 1160 kilograms of drug Ketamine on 19 September 2019 from a suspicious Myanmarese vessel operating near Car Nicobar Islands, the force said in a statement. The haul is worth 300 crores in international market.


On interrogation, the boat crew revealed that they had commenced their journey from Damson Bay in Myanmar on 14 September 19 for delivery of consignment in gunny bags to another boat operating near Thailand-Malaysia maritime border line on 21 September 2019. On rummaging of the vessel on 20 September, 57 gunny bundles of suspicious substance were found and the same was transferred to ICGS Rajveer along with other available documents onboard the vessel.

“ICGS Rajveer resumed her passage with six Myanmarese crew and reached Port Blair on 21 September. Joint interrogation was conducted with narcotics control bureau and local police in attendance. NCB conducted preliminary analysis which revealed that the suspicious substance was Ketamine and there were 1160 packets of 1 Kg each onboard the vessel. The estimated value of the catch is about 300 crores in international market,” the Coast Guard revealed.

In the last five years, Indian Coast Guard has apprehended narcotics and other Psychotropic Substances to the tune of Rs. 6000 crores excluding the current operation.