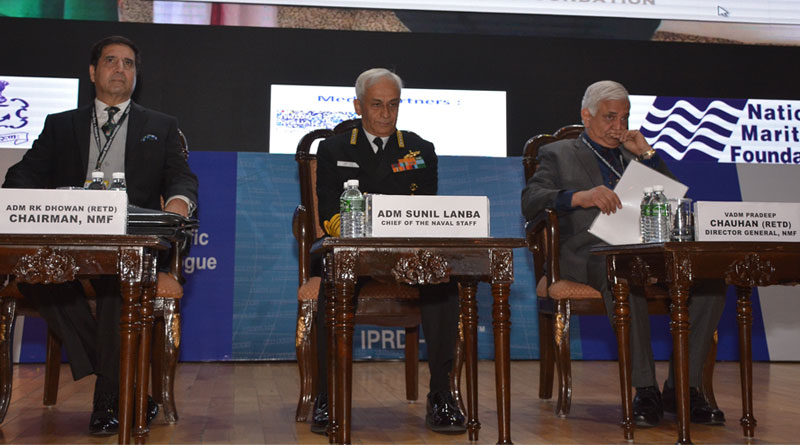 “We also have reports of terrorists being trained to carry out operations in various modus operandi, including through the medium of the sea,” said Chief of Naval Staff Admiral Sunil Lanba

Addressing the attendees of the second Indo-Pacific Regional Dialogue on March 5, Admiral Sunil Lanba stressed that there is ‘renewed focus of the world on the seas’ primarily because of geopolitical and geoeconomic significance of the maritime domain.

Considered as the Indian Navy’s first and only apex-level conference, the Indo-Pacific Regional Dialogue 2019, organised by the National Maritime Foundation, focused on 5 new themes – : (i) Practical solutions for achieving cohesion in the region through maritime connectivity; (ii) measures to attain and maintain a free-and-open Indo-Pacific; (iii) a regional approach to the region’s transition from a ‘Brown’ to a ‘Blue’ economy; (iv) opportunities and challenges arising from the maritime impact of ‘Industry 4.0’; and (v) how the twin conceptualisations of ‘SAGAR’ and ‘SAGARMALA’ might best be made mutually-reinforcing on a regional level.


Speaking about the event, the CNS said “This event seeks to identify and conceptualise challenges and opportunities that lie in the waters, and evolve strategy for mutual benefits of all stakeholders,”

“It is widely accepted that Indo-Pacific Region has been growing in geopolitical significance in recent years due to economic, political and other reasons,” he added.

The Indo-Pacific region held great promise but its future is mired in the ‘shifting plates of global politics and the fault lines of history’.

He said, “A unique blend of strategised financial aid, creeping territorial accretion, information on operations, legal ambiguity and military assertiveness is being wielded by aspiring great powers to establish regional dominance. This is putting the region’s historically delicate stability under renewed pressure.”

Flagging a few ‘entrapment’ debt financing models of countries in the region, he said “we have witnessed such assistance being offered for projects with suspected financial viability, limited local participation, and unequal benefit for the recipients,”

“Some projects have also, arguably, been undertaken solely to support political and strategic designs with almost no benefit to locals,” he added.

In the context of such financing models, several countries like Sri Lanka have been stuck in large debts due to huge finance infrastructure projects funded by China that ultimately turned out to be economically unviable.

Later towards the end of his keynote address, Admiral Lanba warned that there were reports about terrorists being trained to carry out operations via sea.

“We also have reports of terrorists being trained to carry out operations in various modus operandi, including through the medium of the sea,” he said.

Lanba explained that terrorist groups had been evolving quickly across the globe and this particular ‘brand’ of terror could well become a global modus operandi, problem in the near future. “The Indian security establishment is continuously working to address this menace,” he said. It was imperative that the global community acted in concert to contain and eliminate terrorism in all forms.