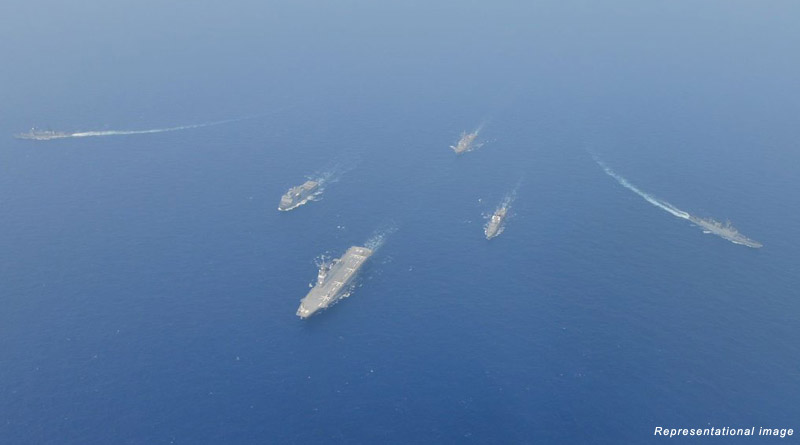 Chief of Naval Staff Admiral Sunil Lanba will be en route to Kochi on March 18 to preside over the debriefing of TROPEX 2019. The Theatre Level Operational Readiness Exercise (TROPEX) is the largest War Game the Indian Navy participates in. While this year’s TROPEX commenced on January 7 and was scheduled for conclusion by March 10, however, due to the recent Pulwama attack, the Indian Navy was tasked to rapidly redeploy for operational readiness in the North Arabian Sea.

The day long review of TROPEX 19 by Admiral Sunil Lanba with all Operational Commander’s is intended to examine the conduct of the exercise and to assess the operational preparedness of the Indian Navy. A realistic audit of the Indian Navy’s deployment philosophy and fighting capability would also be undertaken. The lessons learnt from the exercise will provide the planners accurate assessments to fine tune force structuring requirements, operational logistics, as also material and training imperatives.


With the increasing tensions between India and Pakistan, major combat units of the Indian Navy (including the Carrier Battle Group with INS Vikramaditya, nuclear submarines and scores of other ships, submarines and aircraft) were quickly transitioned from exercise to operational deployment mode. A clear and resolute message regarding the operational posture of the Indian Navy to prevent, deter and defeat any misadventure by Pakistan in the maritime domain was also issued during the tri-services press conference conducted on 28 February 2019.

60 ships of the Indian Navy, 12 ships of the Coast Guard and 60 aircraft were participating in TROPEX 2019. Amongst the key attributes of Naval forces are the ‘Versatility’ to change roles, ‘Mobility’ and ‘Poise’. Availability of such a large number of combat ready assets in the theatre of operations for TROPEX 19 allowed the Indian Navy to expeditiously respond to the developing situation in synergy with the three services. The overwhelming superiority of Indian Navy in all three dimensions forced the Pakistan Navy to remain deployed close to the Makran coast and not venture out in the open ocean.

TROPEX 2019 commenced in the Andaman and Nicobar Islands with a tri-services amphibious exercise followed by SEA VIGIL – the Indian Navy’s largest coastal defence exercise. Exercise SEA VIGIL commenced on January 22 with all 13 Coastal states and Union territories participating along with all maritime stakeholders. The TROPEX itself was thus far the largest in terms of geographical spread covering the IOR and also with regard to the number of participating units.