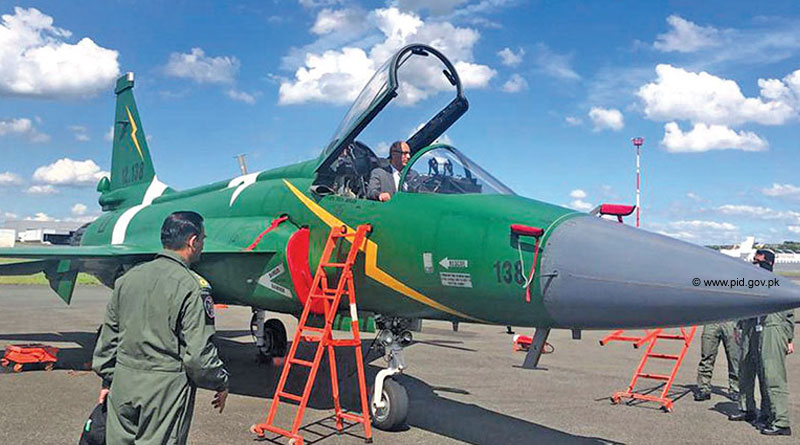 Emerging as a major player in arms trade, China has exported some USD15.7 billion worth of conventional weapons across the globe between 2008 and 2018, making it the fifth largest arms supplier in the world — behind the United States, Russia, Germany, and France.

The dragon state has developed a huge military-industrial complex with its growing footprints in Central Asia, South East Asia and Africa. Though at a modest pace, Beijing’s customer base has been rising steadily. According to a March 2019 report by Swedish think-tank Stockholm International Peace Research Institute (SIPRI), China delivered major arms to 53 countries in 2014–18, 41 in 2009–13 and 32 in 2004–2008.

While China’s primary customers include Bangladesh, Myanmar, Middle East and Africa among others, with a lion’s share of 37 per cent, Pakistan, its key ally in South Asia, remained the top buyer of Chinese arms. Bangladesh and Algeria are the other two big customers.

However, over the years, China-Pakistan defence industrial relationship has graduated from buyer-seller into collaborators. The two have worked on co-developed of JF-17 aircraft, which is now being marketed internationally with Pakistan taking the lead in its promotion at international aerospace shows. The two are also working on the Type 054AP class warship.


Competing with major Western original equipment manufacturers and beating them hands down, Beijing sold weapons worth USD1.93 billion to Bangladesh, becoming its largest supplier of arms, according to ChinaPower.

Interestingly, SIPRI’s December 2019 report, excludes China on ground of ‘lack of available data’, even though the March report portrayed Beijing as an emerging seller of defence equipment. Admittedly, China is not yet a giant of arms exporter, when compared to the United States, whose total arms sales according to SIPRI amounted to USD246 billion. The top five companies on the list, all based in the US — Lockheed Martin, Boeing, Northrop Grumman, Raytheon and General Dynamics — alone exported wares amounting to USD148 billion.

The defence industry in United Kingdom saw a bit of a downturn, with sales falling by 4.8 per cent, to USD35.1 billion which is less than the combined arms sales of the 10 Russian companies in the 2018 ranking which stand at USD36.2 billion. UK’s BAE Systems, which is the largest arms producer, ranked number 6 with a drop in its sales by 5.2 per cent in 2018 to USD21.2 billion.

Moscow’s largest arms exporter, Almaz-Antey, was the only Russian company ranked in the top 10 (at 9th position) and accounted for 27 per cent of the total arms sales of Russian companies in the Top 100. A total of 10 Russian firms made it to the sector’s largest companies.

As far as Europe is concerned, the combined arms sales of the 27 European companies in the top 100 increased marginally in 2018, to USD102 billion, with France edging out Germany. French defence industry clocked a total of USD 23.2 billion, with Dassault Aviation alone reporting an increase of 30 per cent in sale of its combat aircraft.

Three Indian public sector defence companies made a cut in the Top 100 — Hindustan Aeronautics Limited ranked 38, Indian Ordnance Factory ranked 56, and Bharat Electronics Limited at 62. The combined arms sales of the three Indian arms companies listed in the Top 100 were USD 5.9 billion in 2018 — a decrease of 6.9 per cent on 2017.

The decline is mainly a result of Indian Ordnance Factory’s significant 27 per cent drop in arms sales, according to the report. The numbers presented here could be a bit misleading. ‘Arms sales’ are defined as sales of military goods and services to military customers domestically and abroad, thus it is pertinent to mention that India supplies arms to its own armed forces alone. However, under the government’s ‘Make in India’ initiative, measures have been taken to not only achieve substantive self-reliance in defence production, but also undertake defence exports.