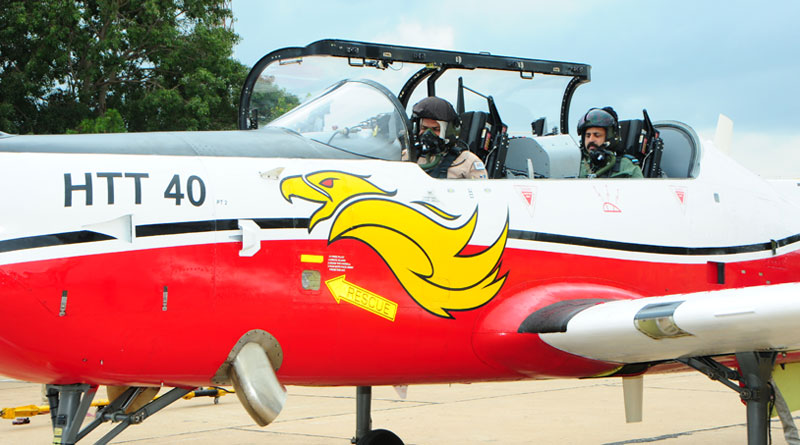 He expressed satisfaction with the aircraft performance and appreciated the design, project and flight test teams for having achieved the commendable progress

Air Chief Marshal RKS Bhadauria, Chief of the Air Staff undertook his maiden flight in the HAL designed and developed Basic Trainer Aircraft HTT 40 in Bengaluru on November 14. During the sortie, he assessed the aircraft flying characteristics including stall and spin. The aircraft took to the skies at 1320 hours and remained airborne for an hour. The CAS was accompanied by HAL’s chief test pilot (FW), Group Capt. KK Venugopal (retd).

ACM Bhadauria became the first serving air chief to fly in HAL developed aircraft at the prototype stage as Chief of the Air Force. He expressed his satisfaction with the aircraft performance and appreciated the design, project and flight test teams for having achieved the commendable progress. The project now needs to be speeded up for certification and HAL must target setting of modern manufacturing facilities with high production rate from the beginning, he added.


Offg. CMD, HAL, VM Chamola thanked the air chief’s support and also congratulated the team HTT 40 for realising the project in good time. Director (Engg. R&D) Arup Chatterjee said the air chief’s support enables the indigenous capabilities of the defence organisations like HAL to rise to the occasion and meet the desired metrics in quality, cost and time lines. CEO(BC) Shekhar Shrivastava stated that details for the production facilities required for producing HTT 40 in desired numbers have concurrently been worked out and HAL’s production will match the requirements of the IAF.

The HTT 40 has completed all major test points and meets the Preliminary Staff Qualitative Requirements (PSQR) issued by Air Headquarters for the BTA programme. HTT-40 has successfully completed stalls, engine relights, inverted flying, acrobatic flying and systems testing. The basic operational clearance and user evaluation trials readiness is expected soon. The design team at HAL is motivated with the air chief’s sortie, the PSU said in a statement.