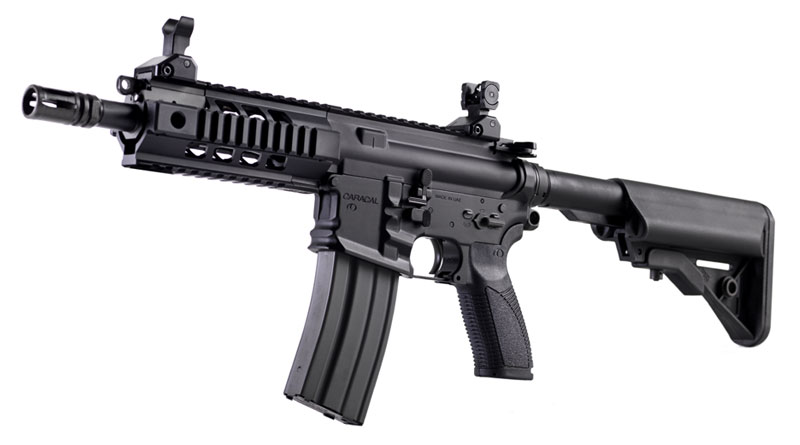 CARACAL is part of the Missiles & Weapons cluster within EDGE, an advanced technology group for defence and beyond, and has wholly owned subsidiaries in Germany and the USA

CARACAL, a UAE-based small arms manufacturer, today stressed in a statement “its commitment to the ‘Make in India’ initiative”, after having previously been selected by the Indian Ministry of Defence in 2018 to fast-track the supply of 93,895 CAR 816 assault rifles to the Indian Army.

In 2018, CARACAL was the winner of Indian Government tender to supply Army with 93,895 CAR 816 assault rifles, moves commitment to fully manufacture in India from start of contract, as opposed to the initial phased approach.

CARACAL has already identified the required land, facility and local partners to be able to commence production immediately. Over 20 percent of the components fitted on the CAR 816 are already made in India, with CARACAL now making commitment to fully manufacture the rifles in-country, in alignment with the ‘Make in India’ initiative. The initiative will also see CARACAL oversee technology transfer.


The company already surpassed global competitors in terms of performance and technicalities to win the bid two years ago, and now confirms its readiness to service the fast track order from India within 12 months.

Hamad Al Ameri, Chief Executive Officer, CARACAL, said, “CARACAL was awarded the Close-Quarter Carbine contract in 2018 to supply the Indian Army with the CAR 816, after having undergone a rigorous selection process. Having agreed to fast track the supply, and with the formalities still under discussion, we would like to reiterate our commitment to our bid and to the ‘Make in India’ initiative. With strong bilateral ties between our two nations, and with India being a key market for CARACAL, we remain on standby to supply the product to the customer upon instruction.”

The CAR 816 carbines are intended to replace the Indian Army’s current 9mm Sterling carbines, with the CAR 816 boasting higher bullet velocity and reduced weight compared to the Sterling carbines. The assault rifle has secured a number of contracts from customers across the Middle East, Europe, and Asia, and has been adapted to suit the Indian Army’s needs, incorporating the latest technological advances.