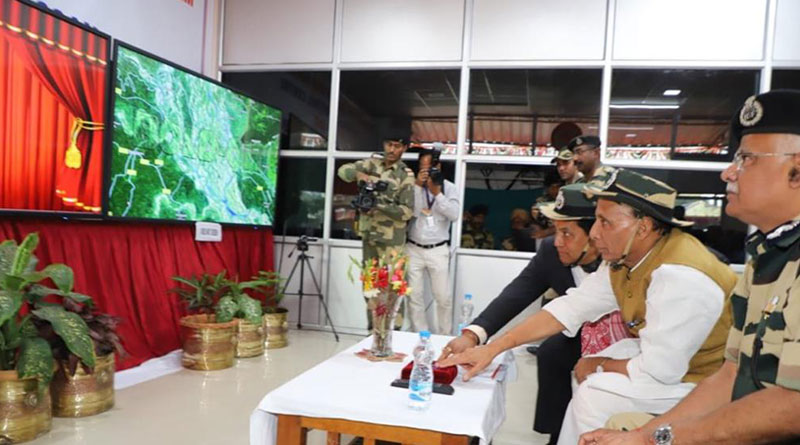 With the Pulwama attack being a recent addition to the ever-growing instances of brazen intrusions and terror, effective border security and management have become extremely vital in the efforts to prevent these kinds of attacks in the future.

While the Border Security Force (BSF) operates differently along the western and eastern borders, the push for a modern and technology-driven modus operandi is clearly evident with some of the recent projects BSF has been involved in. As the government moves forward with its programme to modernise border security and management, BSF has undertaken an ambitious project to enhance surveillance along the Indo-Bangladesh border.

Border guarding along the 61 km border in Assam’s Dhubri district is quite challenging. This is the area where the Brahmaputra River enters into Bangladesh with a multitude of char lands and innumerable river channels. This makes effective border patrolling a very daunting task, even more so during monsoons. The Ministry of Home Affairs, in 2017, decided to come up with a technological solution for enabling effective surveillance in this area. Later, in early 2018, the Information Technology wing of BSF undertook the BOLD-QIT (Border electronically dominated quick response team interception technique) project. On March 5, the BOLD-QIT was officially inaugurated at BOP Barmanpara by union home minister Rajnath Singh along riverine areas of the Dhubri border.


The new BOLD-QIT system is a part of the Comprehensive Integrated Border Management System (CIBMS) project initiated by the MHA. According to top officials in BSF’s IT wing, the project will cover the entire span of Brahmaputra in Dhubri with a data network that will utilise technologies like sonar to detect underground and underwater movement. This information will then be relayed to 3 local command centres and main control centre Barman Para for dispatching QRTs (Quick Response Teams). High-level officials also confirmed that along with the BOLD-QIT, waterborne patrol along the river has also been setup with small boats that BSF’s QRTs can utilise during instances of intrusion. The designated command Centres will be flexible and dynamic in location and functionality so that they can be shifted to boats during floods. The BOLD-QIT will enable round-the-clock surveillance in riverine areas by utilising microwave communication, sonar, day and night surveillance cameras, and a state-of-the-art intrusion detection system. The BOLD-QITs are expected to enhance CIBMS and make it error free.

While BSF’s top brass intends to adopt this technology along the entire length of the Indo-Bangladesh border, it certainly will take time to implement fully and effectively. Furthermore, union home minister Rajnath Singh, during the inauguration day, said that the BOLD-QIT project ‘should’ be adopted along the LC (Line of Control) as well. Rajnath Singh had inaugurated two similar smart fencing pilot projects along the Indo-Pak border in September last year.

According to ADG, Communication and IT, BSF, A. K. Sharma, “The Sonar will be helpful during bad weather and at night when most of the illegal activities take place in the riverine border,”

He further informed that an amount of Rs 86 crore has been sanctioned by the government for sealing the borders of Dhubri under CIBMS. The installation of the same is expected to be finished by October 2019.