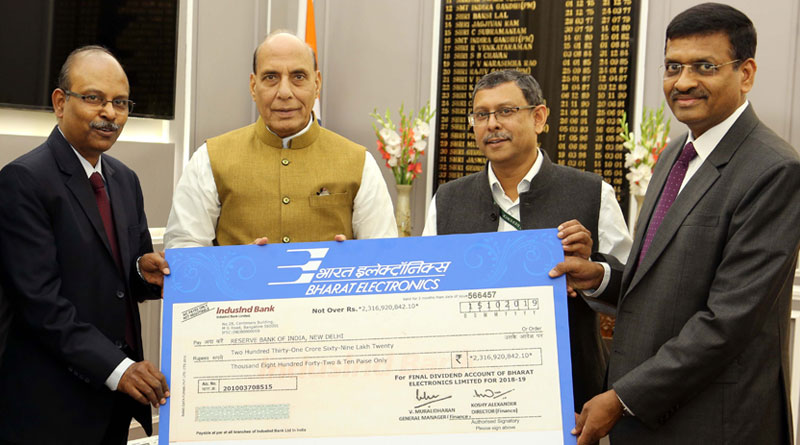 Bharat Electronics Ltd. (BEL) presented the 170 percent final dividend cheque for INR 231 crore to the government of India, the PSU said in a statement. The interim dividend of 170 percent (on face value of INR 1 per equity share) was paid to the government of India in February and March 2019, a press release said. The cheque was presented by the chairman and managing director, BEL, MV Gowtama to defence minister Rajnath Singh, in New Delhi.

Registering a growth of 16.90 percent over the previous year, BEL ended the financial year 2018-19 on a high note, achieving a turnover of INR 11,789 crore. The Profit After Tax (PAT) increased by 37.73 percent over the previous year to INR 1,927 crores. The company recorded an export turnover of USD 21.6 million. According to the PSU, R&D has been the main focus area for increasing indigenisation and value addition in its products and systems. The company invested a total of INR 1,077 crores in R&D last year and achieved 96 percent sales revenue from indigenous technology. BEL also invested INR 668 crores on expansion and modernisation of its facilities, it said.

During the year, BEL also executed export orders for its Coastal Surveillance System to friendly countries such as Maldives, Seychelles and Mauritius. Some of the other highlights of the year included launch of India’s first indigenously developed Auto Fare Collection Gate, SWAGAT, setting up of new marketing offices abroad, and the dual honour of CII EXIM Bank Business Excellence Award and Jury’s Commendation for Role Model Organisation.