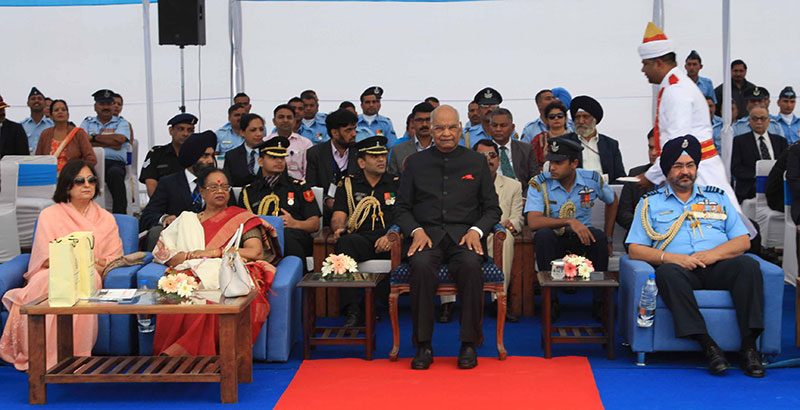 The ceremonial parade was commanded by Group Captain Tushar Vaidya. The President also released First Day Covers of 223 Squadron and 117 Helicopter Unit at the function. A Fly past consisting of MiG-29, ALH and Mi-17 helicopters was synchronised with significant events of the parade. The parade was followed by a spectacular display of precision and daredevilry by the Air Warriors Drill Team. The grand ceremony concluded with a breathtaking air show by the Sarang and Surya Kiran Aerobatic Team.

Speaking on the occasion, the President of India congratulated both the awardee units and complimented all personnel for the excellent Parade. He said that the nation is proud of the capability and competency of the IAF. Excellent performance of its personnel in international exercises, both at home and abroad, is indeed a glowing testimony to the level of training and preparedness of the air force. The IAF, besides safeguarding the sovereign skies of the nation, has also been at the forefront of all humanitarian aid and disaster relief operations. The resilience and tenacity displayed by the air warriors is a great source of pride for the nation.